Crown will not proceed with murder trial of Anthony Reyes 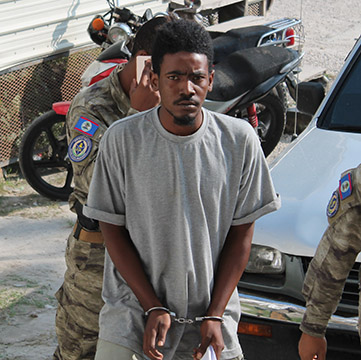 By Aaron Humes: Adrian Sanchez, 20, a construction worker of Police Street, will serve a concurrent sentence of twelve months after pleading guilty before Magistrate Khadeem Palmer to keeping a firearm and ammunition without a gun license.

Sanchez was sentenced to 1 year in jail for possession of one .38 caliber revolver and to a further year for 5 rounds of ammunition. But he will only serve 1 year because Magistrate Palmer stipulated that the sentences are to run concurrently.

Sanchez was busted with the firearm and ammunition on Wednesday, January 29, when the police went to his residence. The police knocked on the front door and heard someone shuffling inside. While they were waiting for someone to open the door, cops reportedly saw a hand protrude through a window with glass louvers and throw a firearm to the ground. They retrieved the firearm which was a .38 revolver with 5 rounds of ammunition in its chambers. Sanchez then opened the door and he was detained. He was unable to produce a license for the revolver, so he was arrested and charged.