Police detain but release suspects in the murder of Ernesto Williams 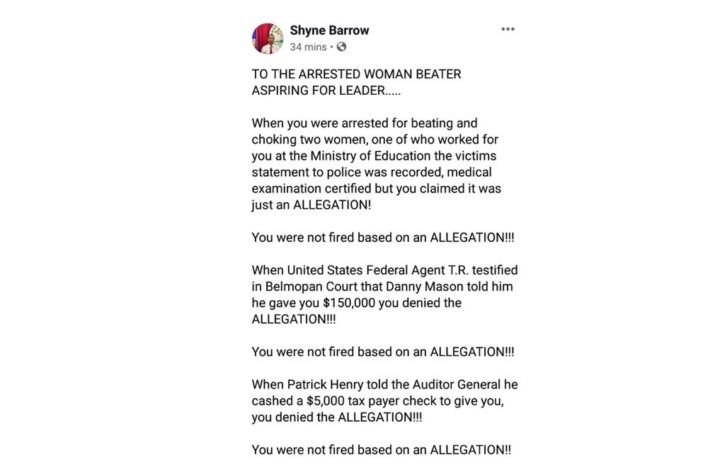 Both candidates for party leader, Deputy Prime Minister, Patrick Faber and Minister of National Security, John Saldivar, have had their advocates going toe to toe trying to sway the minds of the party’s convention delegates, but have also taken indirect swipes at each other.

On Wednesday Faber addressed a social media post to a “convicted criminal” who he claimed was behind posts on an “Associated Belize Press” social media page, denying again any involvement with accused fraudster Lev Dermen, or never being incarcerated, much less convicted of any criminal charge save his 2005 adventure in Belmopan.

But today, “Shyne” Barrow, a supporter of Saldivar, took direct aim at Faber by listing various allegations made about the Minister of Education, Youth, Culture, and Sports, captioning his post “TO THE ARRESTED WOMAN BEATER ASPIRING FOR LEADER…..,” an obvious reference to the 2017 incident reported in Ladyville.

Of that incident, Barrow states, “When you were arrested for beating and choking two women, one of who worked for you at the Ministry of Education the victims [sic] statement to police was recorded, medical examination certified but you claimed it was just an ALLEGATION! You were not fired based on an ALLEGATION!!!”

Shyne goes on to list various charges: that a U.S. federal agent testified that according to “Danny” Mason, he had given Faber $150,000; that Faber received $5,000 in a cheque from former National Sports Council Director Patrick Henry; that Faber knows Dermen, had visited him and received financial support from him; that his “diplomatic passport” avoided him being charged for violating his custody order; and that his “handpicked candidate spent $2.3 million taxpayer dollars without following regulations that protect against corruption and cronyism,” all of which, he points out, Faber has denied.

Barrow implies that some are calling for his candidate, Saldivar, to be fired and barred from the leadership race based on an “allegation” that he received funds from Dermen.

But as Barrow concludes, “Allegations are not enough!!! I’m sure you would agree we need proof? Because if yeriso (gossip) was enough you would have been gone long time bredda……….”