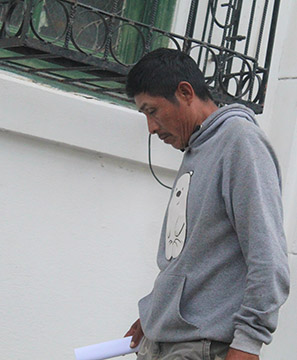 By Aaron Humes: Three fishermen – two Belizeans and a Guatemalan – owe significant fines to the court after a joint bust by the Coast Guard and Fisheries Department last week of 6-10 barrels of shark and excessively long gill nets.

They were jointly charged with possession of shark without a license and possession of six gill nets measuring 2,266 feet. Under the law no one can have a single or joined gill net measuring more than 300 feet.

On the shark possession charges they pleaded guilty and were each fined $300 to be paid by March 3, in default three months in prison.

Martinez pleaded guilty to the six gill nets and was fined $500 due by April 3 or 5 months in prison. The others saw this charge dropped.

Parham was assessed $1,500 in fines for his additional gill nets, due by May 29, in default 15 months’ imprisonment – five on each count.

Carrillo has $800 in fines to pay on his charges by May 4, in default a total of eight months behind bars.

And Martinez must pay $500 by May 29 for his gill net charges or serve 5 months.

The bust was made on Friday, January 31, 2020 at around 3:45 a.m., at Mile 4 ½ on the Philip Goldson Highway at the mouth of Manatee Bar. Coast Guard officials conducted a search for gill nets and illegal activities at a fisherman camp known as Barge area where they found the shark products and the three fishermen.

No orders have been made yet for the found products to be confiscated by the Government of Belize. Fisheries official Hampton Gamboa told us that that decision will be made tomorrow by the CEO.