Premier league leaders, Verdes and Bandits, slip up in week 4 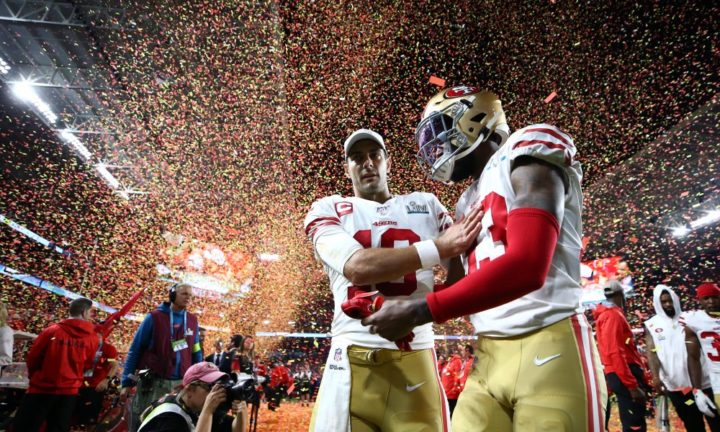 By Aaron Humes: The United States National Football League (NFL) has seen a changing of the guard, with two young quarterbacks putting on an impressive show in the championship game in Miami, Florida.

Super Bowl LIV (54) went to the Kansas City Chiefs, 31-20, over the San Francisco 49ers, ending a half-century of hurt for an original member of the American Football League, whose competition forced the first Super Bowl, which Kansas City lost to the Green Bay Packers.

After a win in 1971, the Chiefs’ efforts to return were thwarted repeatedly, including an overtime loss to eventual winners New England Patriots in the conference title match last year.

But after New England was dethroned in the first round and leading contenders Baltimore Ravens knocked out in round two, the Chiefs produced a high-scoring slugfest to turn aside Houston Texans, 51-31, then stopped surprise package Tennessee Titans in the conference title game.

Led by young quarterback Patrick Mahomes and receivers Tyreek Hill and Travis Kelce, the Chiefs were the “comeback kids”, scoring 28 in one quarter to overturn Houston and rallying past Tennessee after four come-from-behind wins in the regular season.

San Francisco, seeking their sixth title and who had overturned Minnesota Vikings and the Packers scored first and Mahomes, later to be name game most valuable player, showed unusual jitters in throwing interceptions back-to-back, leading to ten points for the 49ers.

But the fightback began and Kansas City scored the last 21 points of the game to seal the win. The defensive line played its part with key stops on San Francisco’s drives.

The Chiefs became the first team to win it all after trailing by at least ten points in each playoff contest. Coach Andy Reid secures his first title after 221 victories all-time, most among active coaches.

The League is celebrating its 100th season and earlier introduced a list of all-time players and coaches.