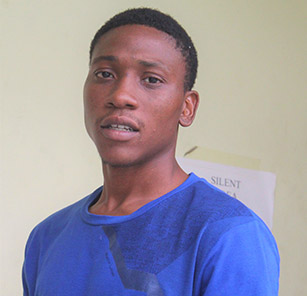 By Aaron Humes: Yesterday police brought to court the man they accuse of pulling the trigger on 21-year-old Kajaon Roches last Thursday.

No plea was taken as the offense he is charged with is an indictable matter that will be tried at the Supreme Court. At a given time, a preliminary inquiry will be held and if sufficient evidence, it will be committed for trial at the Supreme Court and that’s where they will take a plea from him.

Swasey, who was unrepresented, was denied bail due to the nature of the offense and remanded to the Belize Central Prison until March 30, 2020.

At around 8:15 p.m., on Ebony Street near its junction with Magazine Road, Roches was standing on the street talking with some friends when a gunman passed by on a motorcycle and opened fire.