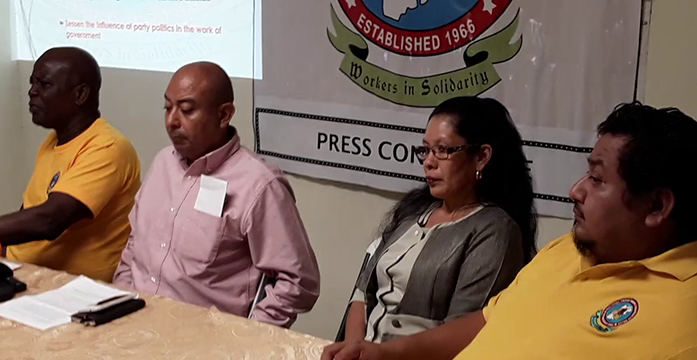 By Aaron Humes: At its recent annual general meeting, the National Trade Union Congress of Belize (NTUCB) passed four resolutions, two of which had to do with internal matters.

The others concern the umbrella organization’s continuing fight to properly implement the United Nations Convention Against Corruption (UNCAC) and its implementation of a Governance Committee by the Trade Union Congress’ General Council.

The NTUCB calls on Government in its resolution to 1) implement the recommendations from the Executive Summary of the first cycle of the peer review process; 2) immediately re-establish meetings of the UNCAC Steering Committee; which has not met in almost a year; and 3) proceed expeditiously with the review and passage of anti-corruption legislation and the establishment of anti-corruption practices and agencies in Belize, all by the end of February, or else.

Or else what? NTUCB President Marvin Mora would not say directly, but he did mention that there would be an “escalation” of the Congress’ choosing, taking into consideration how it would affect the rest of the country.

Presenting on the progress of the implementation, member of the Project Board representing the Congress, Hubert Enriquez, said he does not buy the stalling tactic of focal point and Attorney General Michael Peyrefitte of waiting for the final report, as the recommendations within are covered in the Executive Summary. These include strengthening existing structures such as the Integrity Commission, Public Accounts Committee and others; revising penalties for corrupt practices; and increasing advocacy and capacity training for public officers and those they serve in the general public.

Enriquez spoke of a “Directorate of (Anti-) Corruption” which would merge the existing bodies to work together rather than at cross purposes. He said that Belize is now four years into implementing UNCAC after signing in 2016, but that the process seems to have stalled due to lack of political will and funding. He also cited past political promises such as the enactment of an unjust enrichment law and laws regulating campaign financing.

But referring to the case of Lev Dermen and the current woes of the ruling United Democratic Party, Mora said that while the Congress has not yet had its discussion on the case, it obviously opposes any impropriety that may be found, and that it is another reason why it is pressuring the Government on implementing UNCAC: “Honestly, we would be fighting a losing case if it is that the UNCAC recommendations are not implemented because we would be fighting a war where we don’t have any teeth. So the legislation that needs to be in place first has to go in so that we can put our case together. Whether N.T.U.C.B. goes at it alone or we synchronize efforts with other N.G.O.s and other bodies that are interested to be able to mount a legal challenge if we have to.”