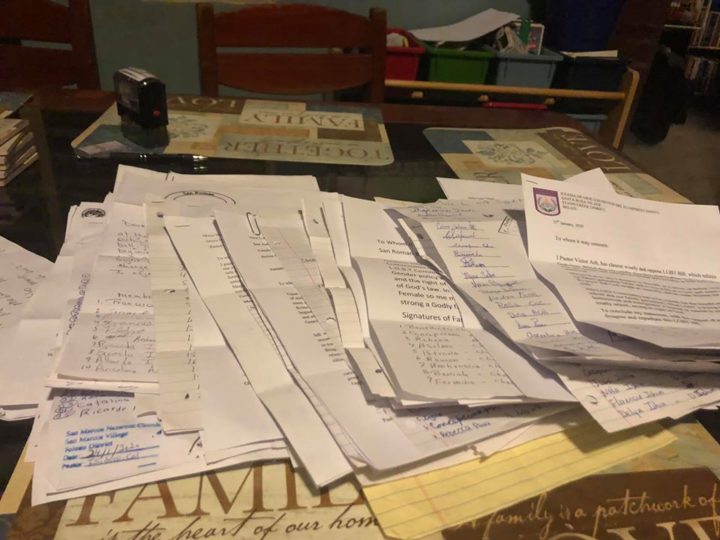 By BBN Staff: Residents in Southern Belize have mobilized and collected over 4,000 signatures singing onto a declaration rejecting the Equal Opportunities Bill.

On January 15, consultations for the Equal Opportunities bill were hosted in Toledo, where residents rejected the bill and protested with placards.

Thereafter, the Christian community including the Alliance of Leaders and Ministers issued a statement saying that they reject the bill.

“We categorically reject the Equal Opportunities Bill, as it is a bill that was fundamentally made and drafted for the support of a minority of Belizeans who have personally decided to change their sexual orientation (LGBT). It’s against our morality, religious belief and freedom, against the natural or traditional family, against the dignity of a person of faith, and against free will among other things,” the statement expressed.

Citing the constitution, the alliance said that “The nation of Belize shall be founded upon principles that acknowledge the supremacy of God and recognizes ‘…that men and institutions remain free only when freedom is founded upon respect for moral and spiritual values and the rule of law’…”

Therefore, the alliance says that the church (or Religious Based Entities) are the principal institutions that set, teach and promote moral and spiritual values in a nation; not the government.

The signatures were reportedly gathered from over 100 churches from 15 different denominations and over 55 communities.

The National Evangelical Association of Belize (NEAB) says that throughout the consultations, they noted a 90% rejection of the bill.

Meanwhile, the Belize National Teachers Union (BNTU) has urged the Government to ‘slow down’ with the process of the 75-page bill.

The BNTU says that it is gravely concerned over the fast pace at which presentations and consultations have been carried out regarding the recently released draft of the bill.

“ The Bill, which contains far-reaching implications for all sectors of our society, demands ample and detailed educational forums for the entire Belizean populace. The conservation between those with special interest has recently reached a fever pitch; where entities both for and against the bill have been producing and disseminating only their biased versions of its content. This has created nothing more than confusion and division of our people,” the union noted.

In addition, the union says that it plans on facilitating an information sharing session for teachers and members.