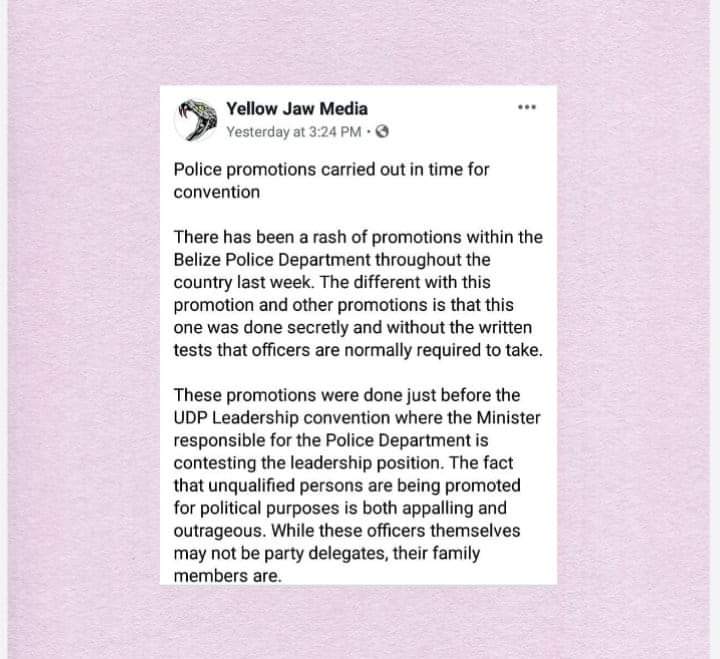 By BBN Staff:  Commissioner of Police, Chester Williams issued a statement today clarifying statements being shared on social media regarding the promotion of officers in the Belize Police department.

The social media page, Yellow Jaw Media published allegations that there are police promotions being done just before the UDP leadership convention this Sunday. The statement published by Yellow Jaw Media on Wednesday afternoon said that “there has been a rash of promotions within the Belize Police Department throughout the country last week” and that the “promotions were done secretly and without the written tests that officers are normally required to take”. Yellow Jaw described these alleged promotions as “appalling and outrageous” and claimed that the promotions were done with the ‘blessing’ of Commissioner Williams who “likes to pretend he is above board and operates honestly”.

“The use of the police department for political purposes is completely wrong”, Yellow Jaw said.

Commissioner Williams took to Facebook to deny the allegations and said that it is a fabrication being done by person or persons with some malicious intent.

“As the Commissioner of police I am fully cognizant of the police promotion rules and in carrying out any promotion process I will ensure that the rules are fully applied to ensure all eligible candidates get an equal opportunity,” Williams explained.

Williams also said that promotional exams for lower ranks are slated for the end of March after which successful candidates will go before a board.

He then explained that as it relates to the senior ranks, those eligible have been invited to apply to go before the promotion board.  Those board interviews, Commissioner Williams said, were concluded this week. The board is then going to make recommendations to the Commissioner based on the candidates performance before the board.

“This process too is far from over.” Williams stated.