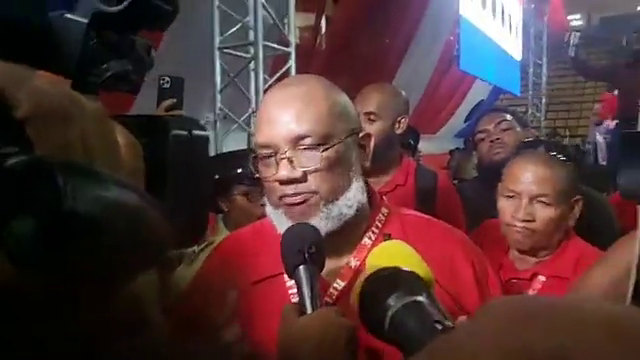 By Aaron Humes: As he had promised a few days ago, John Saldivar faced the press Sunday evening as leader-elect of the United Democratic Party, keeping his remarks short. It is the first time he has done so since November.

And if he is thinking at all of what could come at any time this week from the lips of Jacob Kingston, on the witness stand in Salt Lake City, Utah in the Lev Dermen trial, or any other unpleasant revelations, he is not showing it.

“The cloud that has been hanging over my head has been put there by those who have interpreted and misinterpreted things. I have not been, at this point, accused of anything. I’ve always said that I am not guilty of wrongdoing; I maintain that and until anything else has been proven otherwise that is my position. And I am glad that the people of Belize have seen it that way, whilst the media may not have,” Saldivar said pointedly.

Later, he stated he does not expect anything coming from Utah to affect him negatively, but refused to answer a question about why he continued pushing for Dermen to be made an honorary consul in Las Vegas, Nevada after he was rejected for an ambassador’s post.

The third time is the charm for Saldivar, previously beaten by Patrick Faber in 2010 and 2016, and it feels very good, he said: “I feel vindicated for all the other times I have not been able to make it; I think it’s a signal to people – never give up, always keep your eyes on the prize, know what you want to achieve, and because this is not just for me, this is for my people, for my colleagues, for my party, for my government, it’s an even bigger achievement for me.”

The party has taken a real gamble on the start of its quest for a fourth consecutive term in office, but not having lost since 2003, Lady Luck may still be on their side.