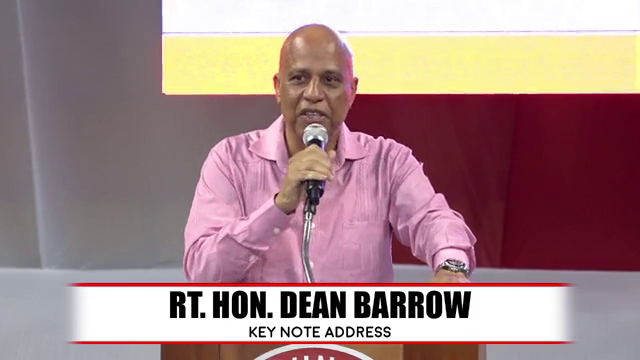 By Aaron Humes: He’s not gone yet, but the end draws ever closer.

And Prime Minister Dean Barrow, addressing the convention floor at the Belize Civic Center, says he regrets it will be his last, even after nearly 4 decades in politics and two at the top of the United Democratic Party.

After a tribute created by and introduced by his chief of staff and Chief Executive Officer, Audrey Wallace, Barrow opened with a jab at Channel 7 News’ Jules Vasquez, claiming the last laugh over his poaching of former reporter Alfonso Noble to edit party organ The Guardian, and appear on WAVE Radio.

But he also admitted to “tearing up” at the memories, and reiterated that it is “the greatest privilege of my existence to have served the United Democratic Party and Belize, and to have been leader for two decades was a joy beyond compare,” adding his thanks for the party’s loyalty in good times and bad – the former more than the latter, he rushed to add.

And with all that good – the first three-term government, unbeaten in elections since 2003, and much more – the party has no time for “chest-beating” or “triumphalism” – “No; it is rather to sound a trumpet blast, to issue a call to arms; to begin a new march inspired by our overweening success; a march that will extend the magnificent feats of the United Democratic Party; a march that will further and indelibly emblazon our names in the annals of Belize’s history. It is a righteous quest to do the hitherto unimaginable, and that, ladies and gentlemen, soldiers and warriors of the United Democratic Party, is to win a fourth consecutive term for this, the best party in this our country!”

Barrow says he leaves believing and that all will be well, and that after the Convention the party will come together – and that while the U.D.P. has its faults, the P.U.P. is far worse.

The Prime Minister left without speaking to reporters before the close of polls on Sunday afternoon.