Juan Guaido rallies support to be recognized as Venezuelan president 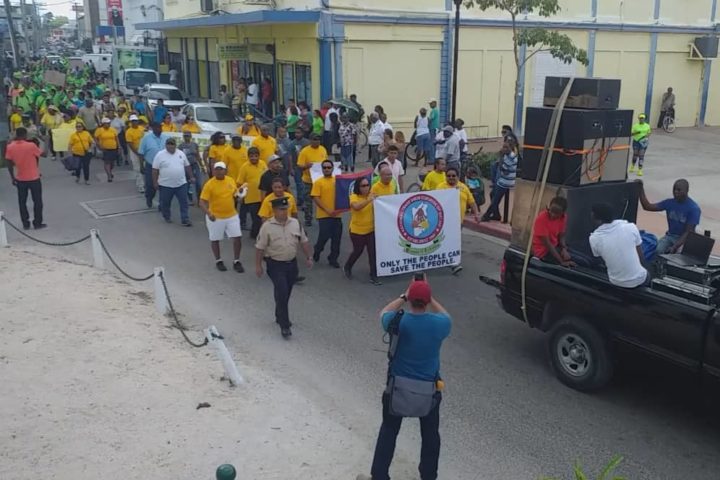 With one of the larger turnouts seen in many years, the National Trade Union Congress of Belize (NTUCB) hopes it has finally gotten the Government’s attention.

True, most of the troops on the ground wore the green of the Belize National Teachers’ Union (BNTU) – after all, they are used to this sort of thing – but today they were not alone. There was the Public Service Union (PSU), the Christian Workers’ Union (CWU), and smaller unions representing water, communications and even students.

He added that compared to the last major union rally in 2005, there is “bipartisan” support – not in the political party sense, but individual people from all parties taking on the system that supports the Government.

As to one of the NTUCB’s significant demands – that former Minister of National Security John Saldivar is investigated for wrongdoing stemming from the Lev Dermen case – the Congress, Mora said, would make a decision on whether to sit with Saldivar, as he has asked, to discuss the matter.

The march proceeded without incident through downtown, falling silent as it passed the Supreme Court where Chief Justice Kenneth Benjamin was in session. On its arrival at the Memorial Park, the leaders of each of the unions spoke for a few minutes, mainly repeating the theme of the march: “Only the people can save the people.”

But the clearest expression of how that can be done was reserved for the two heavyweight finishers, whose unions brought the most energy to today’s demonstration: Senator Elena Smith of the Belize National Teachers’ Union (BNTU), and Evan “Mose” Hyde of the Christian Workers’ Union (CWU).

Smith dismissed the ‘good faith’ of the Ministry of Education to allow teachers to come out, stating they would have whether the Ministry had agreed or not, even wondering if it was an attempt at a bribe. She went on to cite instances of ‘corruption’ in the education sector to do with teaching licenses and the general treatment of this powerful grouping.

Hyde, meanwhile, tried to set the moral compass of this gathering, exhorting attendees to not only say ‘we are the boss,’ but mean it. Which other boss, he asked, would allow those he hires to guard his palace to rob him blind, and then suggest he cannot talk about it? He mused about whether those ‘working in AC’ had forgotten their roots, and even took jabs at his own colleagues – mentioning they had voted down his proposal to move NTUCB headquarters to Dean Street at the former home of the Civil Service Credit Union, which the CWU now owns, and goading them not to compromise and lose sight of what they have asked for.

But Hyde’s main message, in the end, was that Belize does not own much anymore, and every day the little we still have is being taken away. And that it is up to us to say something and do something about it.

Day one can be considered a success, but the hard work is yet to come for the unions.