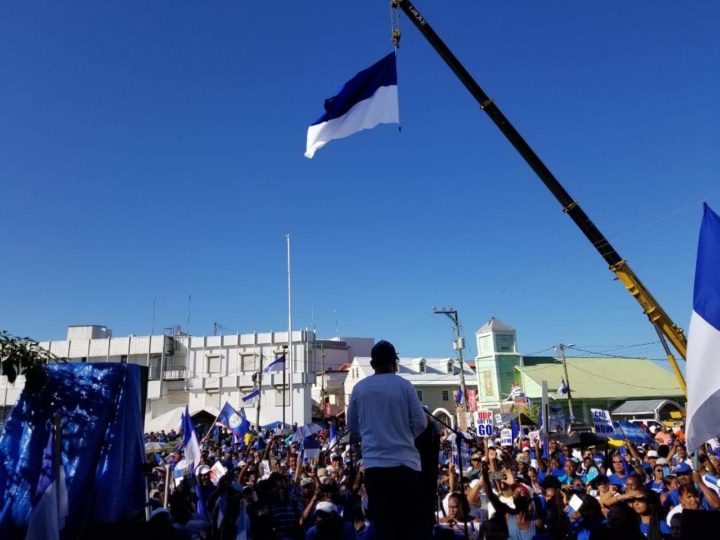 By Aaron Humes: If there was any doubt we are in political season, this past week has ended it.

Two weeks after the ruling United Democratic Party (UDP) flexed its muscle at the Civic Center, and barely 72 hours after the unions’ statement of strength at the Memorial Park, today was the People’s United Party’s turn.

And the P.U.P. surpassed its own expectations, pulling out as many as 15 thousand from across the country to overfill the Battlefield Park and Albert and Regent Streets in the commercial capital.

The purpose of the march was stated to be anti-corruption. But the most common refrain from the rostrum was of the 12 years out of government for the Opposition, and how eager they are to get back to the left side of the National Assembly (when viewed from the media gallery).

Anthony Mahler, standard-bearer for Pickstock, adopted the unions’ position of “Only the people can save the people,” and said that Belizeans have regressed in terms of owning land and housing, education and social justice, and the $1.5 billion the Chief Justice recently declared was unconstitutionally spent should have gone much further.

Julius Espat, area representative for Cayo South and deputy party leader for the western region, expanded on that, directly calling on Commissioner of Police Chester Williams (present overseeing his delegation securing the area) and Director of Public Prosecutions Cheryl-Lynn Vidal to act on that decision.

And he added that audits must be done of the $100 million that was called “slippage” by the Financial Secretary, the Petrocaribe funds and the contractors for the various works, to determine value for money.

National Deputy Party Leader Cordel Hyde focused on how their view of the past 12 years has impacted society. Loss of economic and social opportunity, he said, has caused breakdowns exacerbated by crime. This election, he said, “dah bout unu. Dis da fu unu time fu eat; noh fi no Minister and dehn family eat; noh fi no rich people eat; dah fi ordinary people get weh deh fi get, because they have been left out for too long. But unu can’t sit back. Unu have to stand up.”

Hyde went on to discuss the cost of elections, suggesting that “poor people pikni can’t run,” and citing his own experience in 1998, when he won his Lake Independence seat while working at Amandala newspaper and putting his children through school. It was important, he said, that people of the lower social classes had a say, but in the same breath condemned taking payments before and on Election Day just to vote, calling it “selling the birthright” and losing sight of the bigger picture.

Hyde then introduced Briceño, who closed the show by praising “the power of the Blue Machine” and inveighing against the UDP in English and Spanish.

Briceño said that while the UDP “were filling their pockets,” the audience in Belize City gave him energy and that what happened in 2008, 2012 and 2015 will not happen again in 2020, because the PUP brought hope to address the most serious issues plaguing Belize.

In the spiritual home of the party, stomping grounds of the late Antonio Soberanis and the late Right Honorable George Price, the PUP hopes it has found the wellspring to finally topple the red dragon at the polls.