Are your roads & highways better now than 12 years ago? 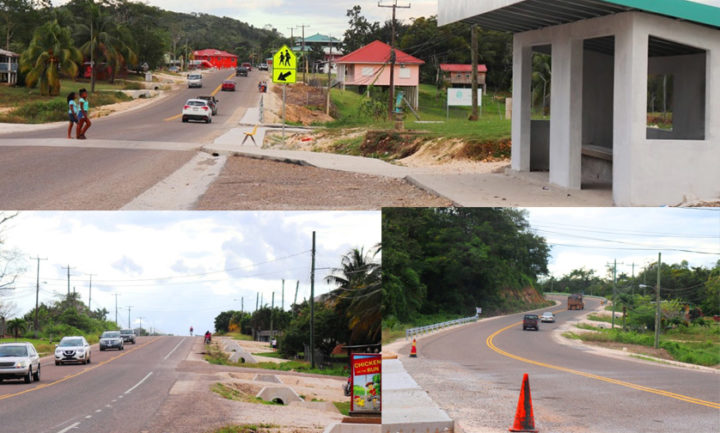 By Delroy Cuthkelvin: The realm of human endeavor is never distinguished by perfection. This UDP administration has NOT been without fault, but the level of accomplishment on every level has been as outstanding as humanly possible, and the transformation of the nation’s road infrastructure is one of the most notable achievements. Of course, the remarkable, nationwide infrastructure upgrade is transforming along with it the people’s quality of life.

These images were all captured this past weekend on that portion of the George Price Highway between Roaring Creek and Blackman Eddy, which was being rehabilitated and repaved simultaneous with construction of the new Roaring Creek Bridge replacement. This portion of the road has already been rehabilitated, reshaped and repaved, but work is still occurring on important road safety features, such as line markings, road studs, guard rails, traffic signs, pedestrian ramps, and bus stops.

As we noted in a previous post, works are already underway to rehabilitate the next portion from Blackman Eddy to Santa Elena, and this will be followed by yet another phase taking us all the way to Benque Viejo Del Carmen.

Of course, similar works are taking place countrywide. Going south, for example, even as the rehabilitation, reshaping and repaving of the Hummingbird Highway is wrapping up, work is about to begin on the upgrade and first-time paving of the Coastal Road to highway standard. In fact, the ceremonial launch of that project takes place today, February 24.

Indeed, in no human endeavor will perfection ever be achieved, but as the next general elections approach, Belizeans, in making their decision on whom to vote for, should ask themselves the famous Ronald Reagan question, “Are you better off now than you were 4 years ago?” or the relevant, customized Belizean adoption of it.

In this particular respect, we ask, “Are your roads and highways better now than they were 12 years ago?” The answer is definitely a resounding, YES!