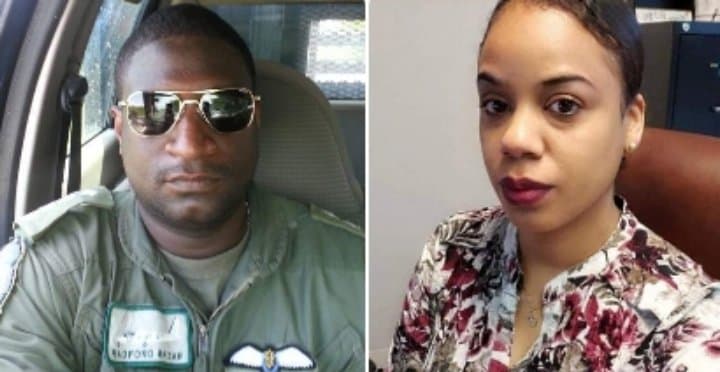 By BBN Staff: On Thursday morning, four members of the Belize Defence Force died after their helicopter went down in the Western lagoon near Gales Point Manatee.

The four soldiers, two majors and two corporals, were responding as air support to the interception of the drug plane which landed off the Coastal Road.

One of the fallen soldiers included Major Radford Baizar, second in command.

Over the weekend his wife, Jennine Thompson-Baizar, posted a heartfelt statement.

She firstly expressed her condolences to the family and friends of the other deceased soldiers.

Thereafter she mentioned, “I am outraged by the events leading up to the death of my husband Major Radford Lee Baizar and the others who tragically lost their lives on Thursday in such a horrific manner. Corruption and greed by those entrusted with the delicate task of running our beloved country is now to the point of national humiliation. To see a Military Mother, Mrs Jean Baizar on the television hurting, desperately seeking answers from the authorities is an outright shame, this should never happen, she should have been treated with far more respect than what was shown to her in such a difficult time.”

“These men did not have to die this way, it was not necessary for them to embark on such a deadly mission. Both Radford and Mr. Ramirez were experts, Radford especially was very much into safety, he would rather ground the aircraft and cancel the mission before risking his life and the lives of his passengers. We may never get the true story and family members are now left with the image of the chopper crashing to the ground with loved ones inside, ” she continued, “The most disturbing part is the fact that they died an entire day before and were left out in the water while the officials rejoiced in the big drug bust. How could you not immediately sound the alarm knowing that our soldiers did not return home!”

According to Baizar, she has fears about the future of Belize as the lives of our people continue to show it has no values to those that wield power and use shortcuts to derive success.

She concluded, “Major Baizar and Major Ramirez did not take shortcuts in life, they invested their hearts and souls into their job, losing precious family time in pursuit of a dream of taking the BDF to higher heights. Belize we must do better!”