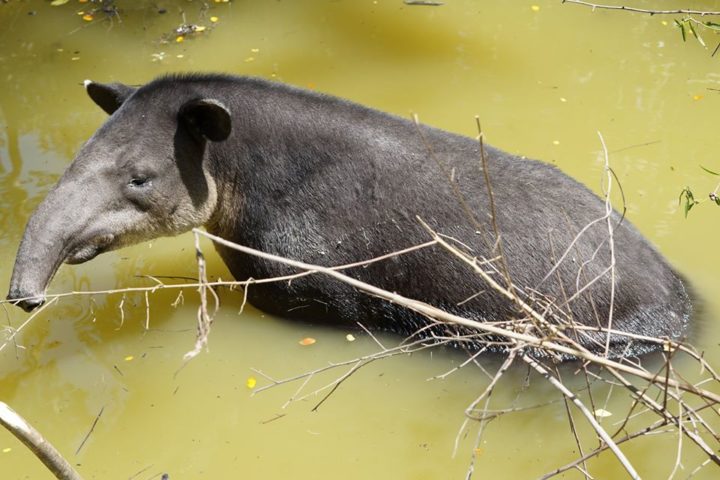 By Aaron Humes: Environmentalists had to make a tough decision Saturday after a female tapir stuck in a waterhole on a farm was found to be mortally wounded.

On social media, the Belize Tapir Project reported that they were contacted on Saturday by a farmer of Ontario, Cayo District who found the tapir.

Celso Poot of the Belize Zoo/Tropical Education Center told us an apparent gunshot wound to the spine had caused paralysis to the tapir’s hind legs, rendering her unable to move.

Poot says he suspects the creature was being hunted, despite the strict prohibition of hunting the endangered Baird’s tapir, recognized as Belize’s national animal.

Veterinarian Dr. Orlando Amir Baptist later confirmed traumatic spinal injury due to gunshot wound resulting in rear leg paralysis. Sadly, after evaluating the case, the difficult decision of euthanasia was made. The carcass was thereafter disposed of.

The Central American (Baird’s) Tapir is an endangered species that is threatened with the risk of extinction. Tapirs are important species for seed dispersal, hence the reason they are referred to as forest gardeners.

The Zoo remains open as an essential service so that its animal population can continue to be taken care of, but no visitors are being accepted at this time.

As a point of interest, neither the Green Iguana nor various game birds including the great curassow are in hunting season, however, the season is open for gibnut, both kinds of peccary and deer, and armadillos. These all remain open until the end of July.

However, endangered species like tapirs and jaguars are prohibited from hunting or killing.

Offenses carry a fine of up to 10 thousand dollars and/or a year in prison.