New Zealand boasts victory over COVID-19, removes most of its restrictions

Government updates on response to wildfires 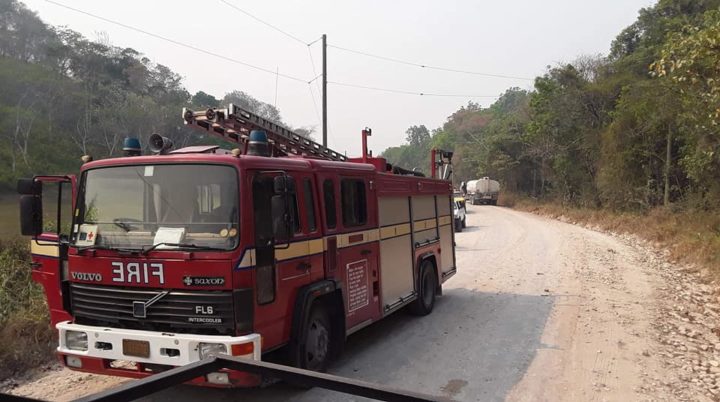 By BBN Staff: On Sunday, April 26, 2020, the Forest Department Wildland Fire Crew from the Mountain Pine Ridge Forest Reserve brought a large wildfire in the Vaca Forest Reserve with multiple fronts under control.

The fire was burning on multiple fronts – east, south, and west, and was responsible for much of the smoke over Benque Viejo, San Ignacio and Santa Elena.

The most aggressive fire on the eastern flank was brought under control by yesterday evening. As a result of this, the conditions in the San Ignacio, Benque, and Santa Elena areas have vastly improved, and there is less smoke in the air.

The Ministries of Forestry and the Environment pledged that the Forest Department fire crew will continue to fight the fires on the southern and western flanks to prevent further spread into the Chiquibul National Park.

The Ministry commends the dedicated officers of the Forest Department for their effort and service to their community.

There are wildfires in other parts of the country including around the St. Herman’s Cave, Springfield, and Bladen Nature Reserve.

With the help of partners from the Belize Audubon Society, Y’axche Conservation Trust and Toledo Institute for Development and Environment, these fires are being fought. The Ministry commends these organizations and other business community members for their effort and service to their community.

The Government informed that State of Emergency declared on April 1, and enhanced on April 11, limited the movement of non-essential personnel, which included the Forestry Department and the Department of the Environment. Nevertheless, due to the health risks posed by smoke, agricultural burnings were monitored remotely by satellite.

Around April 11, the agricultural fires intensified, and new legislation was crafted to address the matter.

With the approval of the Ministry of National Security, the Forest Department and Department of the Environment were activated to engage in field reconnaissance to put a handle on the matter and to engage in an aggressive awareness campaign.

On April 21, the new legislation came into effect, and the Department of the Environment and the Forest Department continued their awareness campaign and began enforcement of the new law. A 77% reduction in agricultural fires was recorded shortly thereafter.

The Ministry said that the Forest Department fire crews were immediately mobilized and quickly responded to these wildfires which threatened Belmopan, Benque Viejo, San Ignacio and Santa Elena – the communities most affected by smoke.

By the night of April 26, many of the wildfires were under control.

Smoky conditions have now improved and fire crews remain in the field mopping up remaining areas.