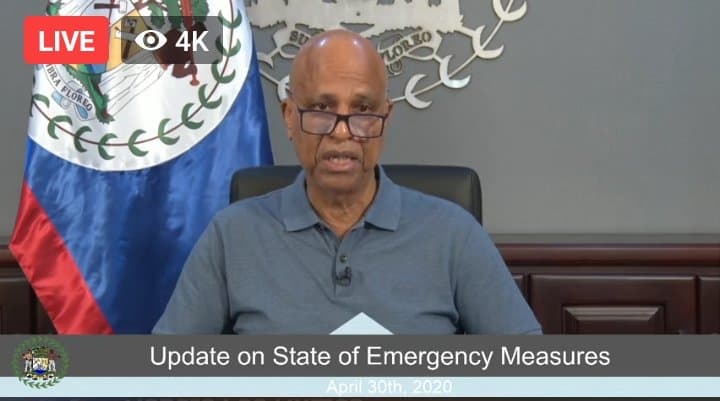 Today marks something of a milestone in our national campaign against COVID-19. The first state of emergency (SOE) proclaimed by His Excellency the Governor General expires at midnight tonight; and this is also, I believe, the 17th straight day that we have gone without recording any new positive case. We, therefore, are turning a corner and at 12:01 a.m. on Friday, May 1st, a new, or extended, state of emergency goes into effect.

That means, there will be in effect a new proclamation issued by the Governor General. Thereunder, there will also be a new statutory instrument (SI), with new regulations that His Excellency will also sign into law. The new state of emergency and the new regulations will, as mandated by the National Assembly, last for 60 days unless sooner revoked by parliament.

The principal reason for this press conference is to sketch for you the changes that the new regulations will effect. I use the word sketch advisedly. All I will do is to highlight some of the new features that the new regulations will usher in. Later on today, it is the Attorney General that will walk the public step by step through every provision of the new statutory instrument. That statutory instrument will, of course, also be available on various GOB websites and generally on social media.

In parliament, and elsewhere, I had made the point that there was no need to fear that the extension of the state of emergency necessarily meant the extension of the regime, in all its rigour, that existed under the previous state of emergency. In fact, I signaled that given how comparatively well we are doing in keeping new cases at bay, we expected to relax the strictness of the last set of regulations. I am, therefore, here to tell you that it is precisely as I intimated: there is a substantial easing that the new regime will bring. I am also pleased to be able to say that the new measures are the product of an agreement between both the National Oversight Committee and the Cabinet of Belize.

Before I go any further, I must make one thing clear. There is no way that, in those famous words of President Bush, that we can declare “mission accomplished”. We see what is to happen now as a breathing space, a somewhat uneasy truce. We will use the opportunity to plan, to prepare for the distinct possibility of a second wave of cases. If that hits, we ask our people to be ready to do it all over again, including returning to the most draconian of lockdowns.

One of the worst things about this virus is that nobody in the world has been able to figure out exactly how it works. It is an unpredictable, insidious enemy that can double back on itself and quickly upend whatever progress we initially make. This is a long-haul struggle and we will no doubt have to make long-haul sacrifices.

For now, though, we believe we have caught a little bit of a break, however short-lived it may prove. We, therefore, seize the opportunity to restart, to the maximum degree possible in the circumstances, internal business and economic activity.

Accordingly, under the new SI, all government departments and all statutory bodies will reopen on Monday, May 4th. We have, naturally, added to the list of approved private sector businesses also permitted to operate; and those add-ons can actually begin on Saturday, May 2nd – after the Labour Day holiday – if they normally employ Saturday opening hours. Lawyers, accountants, real estate brokers, are some examples of private sector, professional service providers that are now on the approved list. There is, as well, a category compendiously described as local manufacturers, under which our carpenters, building contractors, plumbers, electricians, and so on, will also be able to operate. The wholesalers and retailers generally are being freed up, and even call centers can reopen, particularly for training purposes. Belize call center services are increasingly in demand as a result of the pandemic, and the centers can take on well over a thousand new hires if training is allowed. Very very significant for the economy.

Hotels will also now reopen, if they so choose, to cater to a Belizean clientele. Their restaurants will be limited, though, to providing room service and take-out meals.

As a result of all this, the general restriction on movement is being lifted to the extent that it will now permit the public to attend at the various government and private businesses for such services as they require, in addition to the purchase of supplies and essential needs. And in one more concession, beauty salons and barbershops can also resume operations, although, only by appointment basis, dealing with one customer at a time. Spas, I am afraid, will still have to remain closed.

There is much more to the statutory instrument than I have outlined, but as I said, I leave the detailed, line by line exegesis to the Attorney General, whom you will see later today.

I, therefore, have only one other thing to add in this regard. The relaxation, the opening up, is not a free for all. Every business activity, all economic operations, are subject to the social distancing requirements. No public establishment can suffer any member of the public to enter its premises without wearing a face mask, and managers and staff must themselves wear the masks. Also, none can operate without putting in place the six-foot dividers to keep both staff and the public properly spaced apart.

It is then, critically important for us to grasp that ultimately everything depends on our observing the physical distancing and other rules. Thus, it is that we are actually increasing the penalties for particular breaches. As just one example, those caught using the illegal crossings to go especially into Mexico and Quintana Roo, where the proliferation of coronavirus cases has skyrocketed, will, upon conviction, go straight to jail for three months. A second conviction will result in a one-year prison sentence.

Before I turn it over to Dr. Gough, I will say one last thing. We are all hoping soon for the internationally certified rapid tests that will help us to do two things: increase our own local testing capacity, and enable us effectively to test visitors so that we can reopen our all-important tourism industry.

In the meantime, though, let us understand something. We will never be able to test every single Belizean. Furthermore, the science suggests that that is simply not necessary. What the international benchmarks, from WHO and others, say is that there is no exact number of tests to aim for. The guiding principle, rather, is this: you want a low percentage of your tests to come back negative, around 10% or even lower, says William Hanage, an epidemiologist at Harvard. This is because if a high percentage of tests comes back positive it is clear there is not enough testing to capture all of the infected people in the community. The lower the percentage of tests you are doing that comes back positive, the better. By that standard, Belize with only the cases that we have documented from over 700 tests, is doing well percentage-wise. We are certainly well below that 10% positive benchmark that signals the need for greatly accelerated testing.

Also, at the beginning of an outbreak where the number of people infected with the virus is low, a much smaller number of tests is needed to accurately assess the spread of the virus. As the virus infects more people, testing coverage needs to expand in order to provide a reliable number of the true indication of infected people.

All that notwithstanding, Belize is moving on with increased testing as Dr. Gough, to whom I now turn, will also explain.