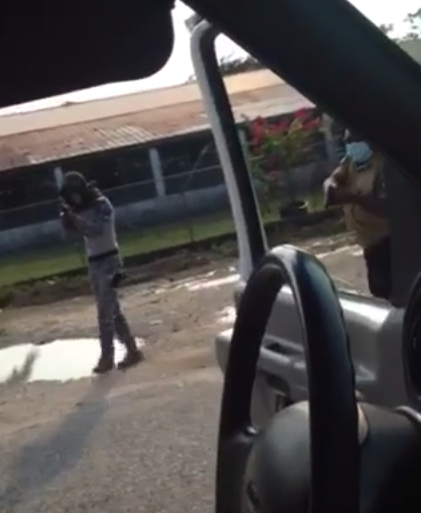 By BBN Staff: Earlier today, a video was widely shared on social media showing a team of police officers with their guns drawn, stopping an ambulance, and Commissioner of Police Chester Williams has clarified that the stop was made in an effort to ensure that a crime was not being committed.

“The police had received information that the ambulance driver was being held and forced to transport drugs and guns from Dangriga to Belize City,” Williams said.

He went on to explain that, based on this the police officers at the Hummingbird Highway checkpoint tried to stop the ambulance, but it ran through the checkpoint. The officers noticed that the ambulance had a Stann Creek license plate and contacted the Southern Regional Hospital to see if an ambulance had left from there, only to learn that there were no ambulance deployments from the hospital.

“The other checkpoint out of Belmopan on the George Price Highway was then alerted and again upon trying to stop the ambulance the driver just ran through the checkpoint almost knocking down the officers,” Williams said.

The ambulance was finally stopped at the checkpoint in Hattieville, where the officers made checks and confirmed that everything was alright and that the driver was transporting a sick person. Williams stressed that the entire ordeal could have been avoided if the driver had simply stopped and explained the situation earlier.