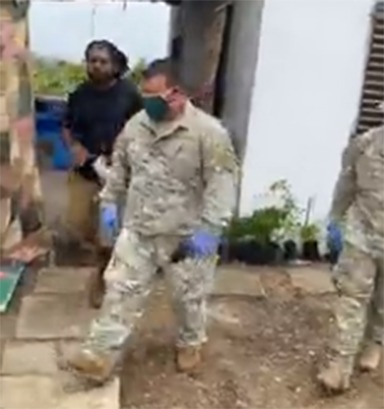 By Aaron Humes: Belmopan-based land activist Nigel Petillo has been detained by police, who picked him up late this morning from his property at Mile 41, the Harmonyville Development community on the George Price Highway.

Up the road at Mile 44, he had tried this morning to organize a meeting of persons seeking land at the spacious and reportedly abandoned 2,500-acre property.

Police intervened, stating no provision was made in the State of Emergency Regulations for mass gatherings beyond 10 persons. Today’s gathering had many times that.

Video of the detention was taken by fellow activist Wil Maheia, who narrated as Petillo was led to the police vehicle.

Also reportedly held is attorney Arthur Saldivar, who had gone to assist in a legal capacity but reportedly took his mask off in the police station.

Petillo insists they are doing nothing wrong and should not be interfered with.