PSU emphasizes the importance of auditing for better government efficiency 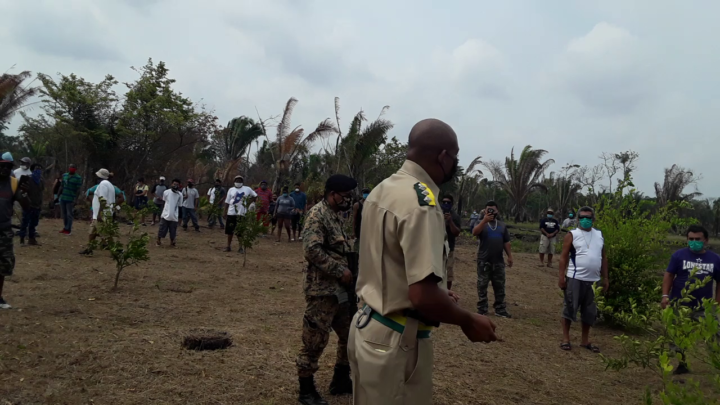 By Aaron Humes: Having been unable to convince Nigel Petillo not to hold it, law enforcement stood toe-to-toe with his supporters at the Mile 44 property where a meeting to discuss the way forward on taking control of it was to be held this morning.

This week, Petillo has been trying for a repeat of his success at Mile 41, George Price Highway, where the community known as “Harmonyville” sprang up from a property abandoned by an overseas owner, some ten years ago.

This property is 2,500 acres in size and sprawls next to the Benny’s warehouse and across from cane lands reportedly belonging to Santander Sugar.

The rationale of Assistant Superintendent and second-in-charge of Belmopan Police, Elroy Carcamo, is that while Belize remains in a state of emergency, Belizeans cannot be out and about except in emergencies, and in the eyes of authorities this did not qualify.

Calling on his skills in community policing, Carcamo implored the gathered crowd to disperse or face arrest. After some negotiation by Tom Greenwood and David Almendarez of FECTAB to allow persons to properly sign a register indicating interest in acquiring property, most left in trickles, by vehicle or foot.

Either side of the George Price Highway saw lines of parked vehicles going about a mile in either direction. Police hastily set up a checkpoint next to Benny’s to monitor traffic.

While ASP Carcamo declined to speak on the record, Petillo was not shy.

In brief remarks as he was being escorted away from the scene by attorney Arthur Saldivar, Petillo questioned why it was that poor people could be harassed this way for raising concern about an important issue while the elites are unbothered, swanning away on the beaches.

He warned that the fight was not over, and “we want our land; we wah tek wi land.”

Twenty-five-year-old Martin Castillo of Belmopan says all he wants from the authorities is a piece of land, as he considers that the most valuable asset to start a business.

He told us he wanted to start the “revolution” today and was willing to die to claim his birthright. He claimed the absentee owner, a Chinese (not clear if from the Mainland or Taiwan) had died years ago and the land had been abandoned from before that. It was clear, he said, that if people didn’t move now the Government might find a different owner to buy it.

The Ministry of Natural Resources has made clear the property is national land and owned in the Crown, and so squatting is illegal and at your own risk.