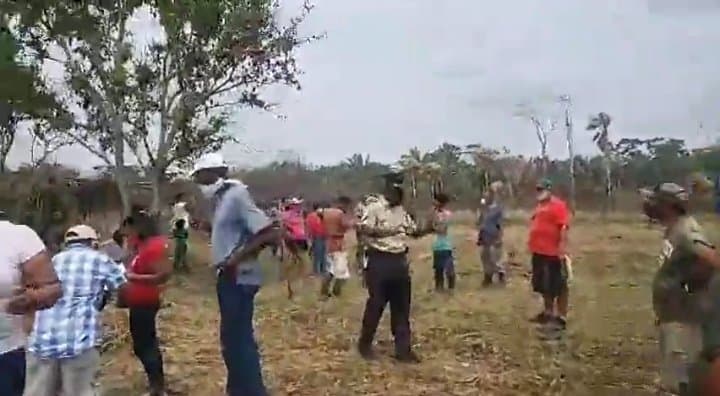 By Aaron Humes: Can Nigel Petillo of the Belize Grassroots Youth Empowerment Association (BGYEA) turn the trick again as he did ten years ago, and successfully take over another apparently abandoned parcel of land along the George Price Highway?

It appears he still has something of a following although the organization officially discounts participation in Sunday’s dispersed gathering which was to kick off at 10:00 a.m. Reports suggested hundreds if not thousands were either gathered at the site with sufficient social distancing or on their way in when police stood their ground.

While Petillo was initially nowhere in sight when Assistant Superintendent of Police Elroy Carcamo began reading the warning to disperse, protestors were more than willing to speak for him.

An unnamed man from Belize City told Carcamo directly that hunger had brought him to Cotton Tree.

The father of six said he has yet to receive any line of Government assistance and challenged Carcamo for standing in the way. The former community policing officer calmly responded by advising that he leave, as “this is not the place for that.” Twenty-five-year-old Martin Castillo, from Belmopan, agreed with Belize City activist Emerson Guild that Belizeans do not value land and have not really had to fight. But Castillo says he is ready to.

“Elections a come November; August or sometime before September they have to have convention, we know they will spend money. You follow? Elections come and a new government comes in, they sell this, what will we get?” Castillo said. He told us that if he does not get a piece of land now, he may never get his chance.

“I want dehn give me my land big man, so that I could plant on my land, so that I can make money on my land. And if I have to fight for it, then today is the day I die,” Castillo swore. “Together we stand, divided we fall.”

Castillo told us he simply does not have the money to go through the process, but this land is available and for the most part undeveloped. He conceded that if the land were clearly developed it would not be such an issue, “but all my life I di travel between Belmopan to Belize City and this [has been looking] the same way for years! When will we see the change? Benny’s come and builds up, Santander come, take over there [gestures], over there is cane all the way to Valley [of Peace]. The people noh di get ina dat; you get the sense; we noh even feel a gist of what they put there, but here where we have an opportunity to get something, they want to take that away from us?”

Petillo told us that while the elites are on the beach, undisturbed, the poor and struggling are treated quite differently.

“The land very big. I noh see how is it that we wrong for being out here to register our frustration…we di congregate, we di come together fu talk bout an issue that’s been affecting us for generations, but that’s how we have been treated every time. The police dehn come out ya with big ra-ta-ta-ta, artillery for poor people, you know!”

Petillo also made note that no one was armed with anything other than machetes to clear the land. “Why is it that every time the poor people come together and register their frustration, the government will greet us this way? But you know what, da every five years – dah only den dehn value we, dah only dehn deh si the importance of the poor people. The movement has begun. We noh gwen no way. We wah fu we land; we di tek back fu we land.”

And as Castillo retorted when we suggested tomorrow may never come for the youth: “Tomorrow might never come if we noh mek it come! Because the future is in our hands; if we noh fight [now], we will never fight again.”