Courts celebrates its “Road to 25” with massive pre-anniversary sale 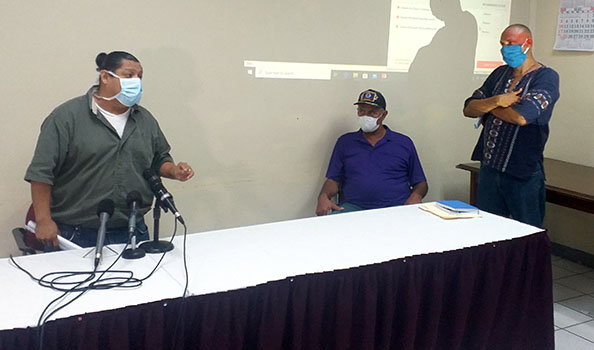 By BBN Staff: The Federation of Cruise Tourism Associations of Belize (FECTAB) announced today that it has a new President, despite being unable to hold elections due to the ongoing COVID-19 pandemic.

At a press conference held this morning at the Belize Institute of Management building in Belize City, David Almendarez announced today that he would be taking over the presidency from Tom Greenwood but would continue working alongside Greenwood for the betterment of the association’s members.

“We’re definitely all about taking people out of poverty, we’re trying to ascertain ways to get our people back to work during this pandemic and trying to build alliances so when the tourism industry gets back we’re right in place,” Almendarez said.

Greenwood addressed the fact that the organization is currently not registered having not submitted its articles of association since 2010, noting that plans were underway to ensure that all of FETAB’s paperwork would be in order this year; however, those plans had to be deferred due to the pandemic. He stressed that with the ongoing developments in the tourism industry, the association could not remain quiet and wait for the paperwork, because advocacy on behalf of its members was urgently needed.

“In the absence of the ability to do something, you must find a way to do it,” Greenwood said. “We made a decision, I am to be president emeritus and the next man in line takes over but as soon as the pandemic is over…we go through the process and either endorse the acting president or by then other people will come in…”

FECTAB’s conference was also to use as a platform to publicly express its support for the Feinstein Group’s Stake Bank Cruise Port and to publicly condemn the proposed Waterloo Cruise Port at the Port of Belize, due to its connection to Lord Michael Ashcroft.

The group stressed that it has a 25-year contract with the Feinstein group and that they have been promised a state-of-the-art area within the port where tour operators can engage with cruise ship passengers to offer their tours. They stressed that Feinstein’s port would be ready for operation within 18 months, which renders the Waterloo port unnecessary.

“Mister Ashcroft should know that we do not have anything against him personally. But it is the record that he has and the record that we have that causes us to clash,” said FECTAB member Yohnny Rosado.

FECTAB members were recently arrested and charged for breaking state of emergency regulations when they gathered in protest outside of Channel 5’s studios while Lord Ashcroft was on the Open Your Eyes show. Rosado has since apologized for the incident. Notably, Greenwood told our newsroom that they were not out there in protest; however, interviews on various media outlets showed Rosado and others with signs picketing Ashcroft and saying that they were out there in protest.