Contrabandistas to be put under manners by new joint patrol 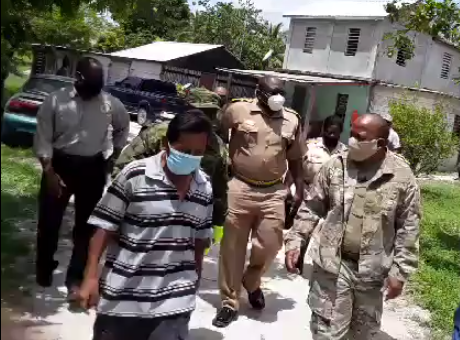 By Aaron Humes: In midweek, the village of San Victor, Corozal District, was again the epicenter of a confrontation between villagers and the Customs and Excise Department, with the authorities forced to retreat from a group of contrabandists returning to Belize.

There was a separate incident reported the previous day as well.

It is one more indication that the village of 1,000 residents seems to be a law unto itself – and in the past, authorities even turned a blind eye as a result. But not anymore, and certainly not in the age of COVID-19.

“I decided to take a visit to San Victor because of the fact that we continue to get information that persons who are engaged in the contraband trade continue to go across the Mexican side, knowing the situation over that side of the border, getting contraband and coming back to Belize,” Williams said.

And while the Commissioner allowed that in the past the Customs Department might give those just buying for household use “a run,” times are different now: “…at this time because of the pandemic and the situation in Mexico we cannot allow you to go over to Mexico none at all, much less to bring in even a pound of flour.”

But enforcement will be easier said than done because of the layout of villages like San Victor, where there is a single road up to the river surrounding by dense foliage and no kind of permanent enforcement presence (the Belize Defence Force currently runs a boat patrol in the area). So the first stop for the Commissioner was the home of village chairman Concepcion Cobb who gave his vote: “I am cooperating with you all the law, the authorities here and I’m happy and conforming because I think that the people of San Victor my villagers should be able to see that you’re working to control COVID-19 as you say, for our people.”

Williams also appealed, as he said, “…[to] persons within the village who we believe can assist us in using their influence to deter those persons who are involved in the contraband trade and I am happy to say that every person we visited they were very much receptive to us and they all expressed their own concerns as well in terms of people going over to the Mexican side and coming back over to this side.”

He also noted that while he would liaise with Comptroller of Customs Colin Griffith for their assistance, it is up to the security forces to take up the challenge.

Thus, a joint police and military patrol goes into effect in the area to monitor contraband routes and deal severely with anyone who is caught with contraband or going over the Mexican side because, as Williams said, “we have to make people understand that these activities at this time, they don’t only put themselves at risk but they put the entire nation at risk.” The patrol, he added, would continue “for as long as is necessary.”

Social media also comes into play with the establishment of a community WhatsApp group to report those contravening regulations. In the interest of privacy, a direct link will also be established with the officer in charge.

But what about villagers’ needs? While those who spoke with Williams readily admitted they had stopped going over to Mexico, it means they need household assistance, and he committed to speaking with co-head of the National COVID-19 Task Force and CEO in the Ministry of Human Development Judith Alpuche to ensure those needs are addressed.