Belize at 9 weeks since first reported case of COVID-19

From half a million to a target of 15 million pounds, is pineapple set to become the “Queen of the South” 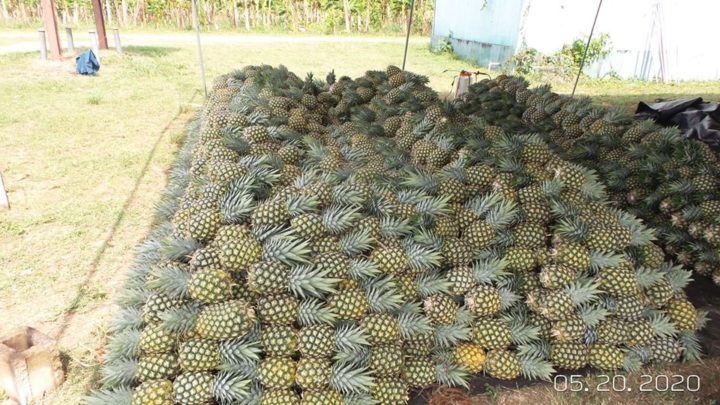 By Hugh O’Brien: Pineapple is a new crop that is being ‘groomed’ to become an important second crop for citrus and other farmers in the Stann Creek Valley and northern Toledo district. But is it possible for pineapple to become the “Queen of the South” and hold its own alongside the citrus industry.

According to Luis Tzul, Agronomist for the Citrus Growers Association (CGA) the answer is yes. This coming Tuesday, 26th May, CGA will deliver its first shipment of pineapples for 2020 to be processed by Citrus Products of Belize Limited (CPBL). This delivery from CGA joins the half a million pounds that is delivered to the factory each year by farmers, mostly from Trio Village in northern Toledo.

What’s different about this new effort is that the new fields of pineapple are all being planted with the MD2 variety which is ideal for processing due to its shape and high pectin levels. Over 550,000 MD2 suckers/planting material were imported last year from Costa Rica and planted in Belize, and from this initial stock, new suckers/planting material will be obtained to supply farmers who are participating in the pineapple programme.

Pineapple processing by CPBL commenced in 2002 with just over half a million pounds of fruit delivered in the first year and almost one million pounds was delivered in 2003. This early effort was organized by the Ministry of Agriculture and farmers received transportation and technical support to get their pineapples to the factory.  Since then, however, pineapple deliveries to the factory has had its ups and downs and it has only been until recently that there has been a renewed interest in processing this crop.

One great opportunity for the pineapple initiative in the south is that farmers are able to use technology to induce flowering and produce pineapple year round. In addition, this technology allows farmers to target the production and harvesting of the bulk of their pineapple for delivery to the factory during the June/July period just after the factory has completed its regular processing of the citrus crop ends.

The most important aspect of pineapple production is that apart from CGA and CPBL, a couple hundred participating small farmers, mostly from Trio Village in Toledo and St. Margaret’s in Cayo are expected to benefit from the revenues. Belize would also no longer need to import pineapple concentrate thereby saving much needed foreign exchange; on the contrary, exporting to CARICOM and other countries will generate valuable foreign exchange.

BBN wishes the CGA, farmers and the CPBL factory the best in their endeavor to develop this new industry in the south.