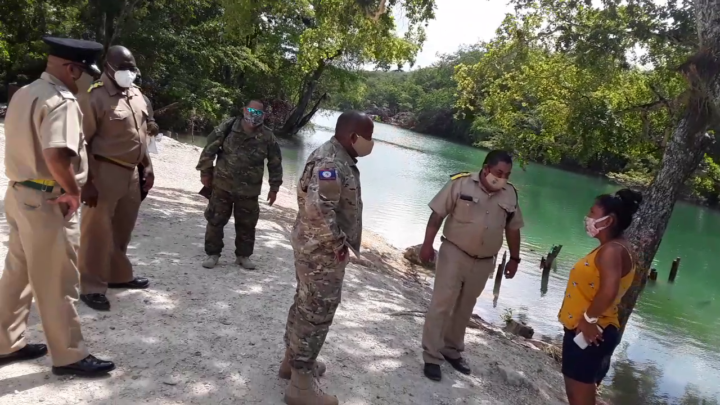 By Aaron Humes: During Friday’s tour by boat of the “Contraband Corridor” – that stretch of the Rio Hondo between Santa Cruz, Orange Walk District, and San Victor, Corozal District, authorities located items believed to belong to contrabandists that they had to abandon.

Cocom told CTV-3 News that “it suggests that [persons were in the area previously,]” but no one was there when the bust was made.

Cocom said they will redouble their efforts on the upcoming joint patrols.

Meanwhile, Commissioner Williams confirmed that a Mexican held in Santa Cruz last Wednesday for hopping the Hondo into Belize is in quarantine in Corozal Town at the ITVET building, as are others picked up on Thursday. After 21 days in quarantine, they will be charged and brought to court.

While in Santa Cruz on Friday, village chairperson Kimberly Medina told the press that, “[the BDF patrol] is going into every single blind spot and they are well informed about the different blind spots, so that is contributing a lot to the contraband slowing; eventually, it will stop.”

Speaking for her village, Medina added that “99 [percent] of the population are cooperating with authorities and not going over to Mexico.”