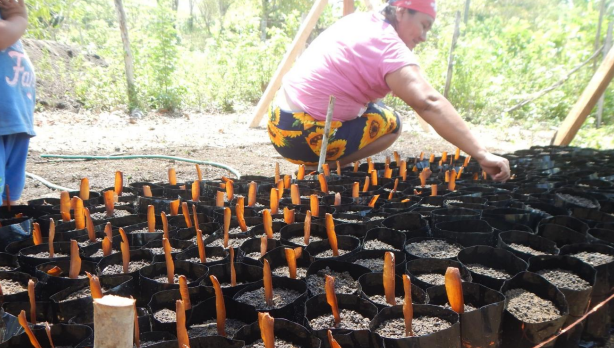 By BBN Staff: The Mopan River is shared by both Belize and Guatemala.

The community of Arenal is the first Belizean community where the river enters and this is the village where a reforestation project is being launched, led by 18 women from the Arenal Women’s Conservation Group.

The idea for the creation of a nursery with over 10,000 seedlings came about due to the forest cover being lost along the river banks and the women’s enthusiasm to develop a socio-environmental service by the community.

The nursery consists of mahogany, Maya nut and cedar species; these are located on two yards, and are tended by members of the group on a rotational basis.

The seedlings are expected to be planted before the end of the year in ten communities including Arenal, Benque, Succotz, and San Ignacio. To do this, the group will partner with the Cayo Watershed Conservation Alliance, which consists of 10 communities in Belize, whose main mission is to help protect the rivers in the Cayo District.

The Mopan River starts in Peten, Guatemala, where it joins with the Chiquibul River at the community of Los Encuentros, Guatemala.

The major threats to the river in Guatemala consists of garbage pollution, removal of riverine forest for expansion of cattle pastures, and deviation of the river flow. In Belize, the Mopan River is primarily threatened by deforestation and garbage pollution.

This Arenal women’s project is not in isolation, as it is accompanied with an alternative livelihood and agroforestry pilot program.

Since November, Friends for Conservation and Development (FCD)’s Extension Technician has been providing technical assistance and supplies for a chicken rearing program consisting of three chicken coops and 350 chicks for 20 women in Arenal as direct beneficiaries.

FCD says that the objective is to obtain eggs from the raised chicken for their subsistence and for sale as part of a food security endeavour.

In addition, three men from the community are engaged on an agroforestry program which incorporates cacao, avocado, mahogany, cedar, lime, plantain, corn and beans in three plots of land consisting of 32 acres.

The community nursery is being supported by the World Wildlife Fund – MesoAmerica as part of the objective to restore forest cover.