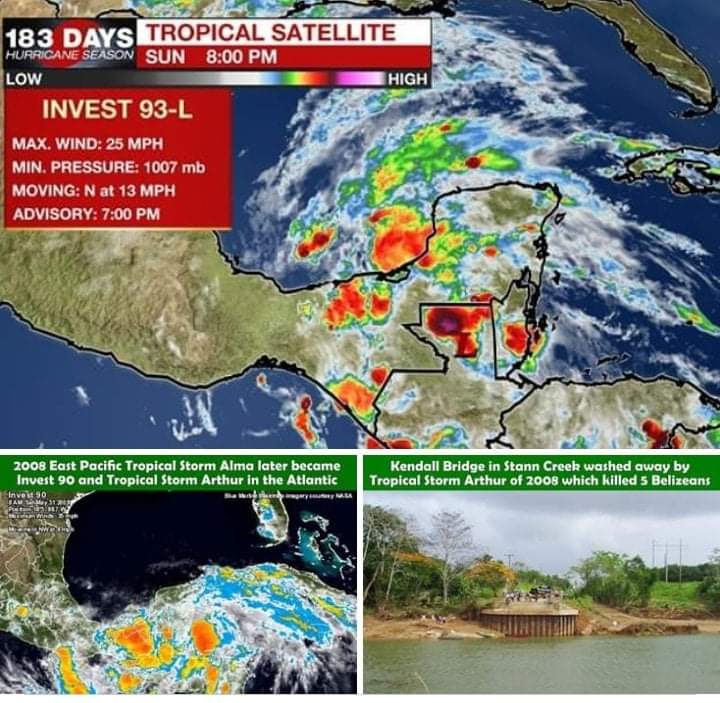 By Delroy Cuthkelvin: Having already killed 10 persons in El Salvador, Tropical Storm Amanda, the first named storm in the East Pacific for 2020 (now downgraded to a remnant low, Invest 93

L) has brought heavy rains over Central America (including Belize) and could well re-emerge in the Gulf of Mexico as the third named storm of 2020 in the Atlantic.

This would be déjà vu, shades of Tropical Storm Alma which formed in the East Pacific on May 28, 2008, then crossed over into the Gulf of Honduras as Invest 90, quickly became Tropical Storm Arthur (the first Atlantic named storm that year), and immediately made landfall in Belize on this very date in 2008 (May 31), causing heavy flooding, particularly in the southern part of the country, washing away Kendall and Mullins River bridges, and killing 5 Belizeans.

Should the remains of Tropical Storm Amanda re-develop in the Gulf of Mexico, it would NOT pose as much of a threat to Belize, but this tropical system has already brought us much heavy rains and some flooding; and tonight the rains continue.