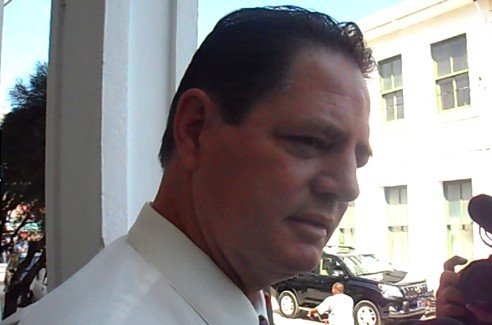 By Aaron Humes: The former Minister of State for Immigration and Nationality Elvin Penner has told KREM News that in a lapse of memory, both he and attorney Senior Counsel Ellis Arnold apparently were not aware they were scheduled to attend court in Belmopan today, Monday.

But the court did not forget and it issued a bench warrant for Penner to be located and brought to court. Such warrants are typical in assisting the court to locate missing defendants and witnesses for criminal trials.

Penner says he has been asked to present himself in court on Tuesday, where he will get to tell his story to the judge.

Penner is accused of knocking down Kenrick Myvette three years ago this month, causing fatal injuries.

The former politician was driving a Ford Excursion heading west to San Ignacio and Myvette a motorcycle, on his way home to Unitedville Village, Cayo District, in the opposite direction.

Their collision took place in the vicinity of the Running W plant. Penner told reporters at the time of his arraignment that he never saw Myvette coming as he tried to overtake the vehicle in front of him, and a swerve to the right was not enough to stop the fatal collision.

Penner is charged with manslaughter by negligence, causing death by careless conduct and driving a motor vehicle without due care and attention. He is out on bail.