Belize Crime Observatory: “COVID-19 continues to alter the dynamics of crime in Belize” 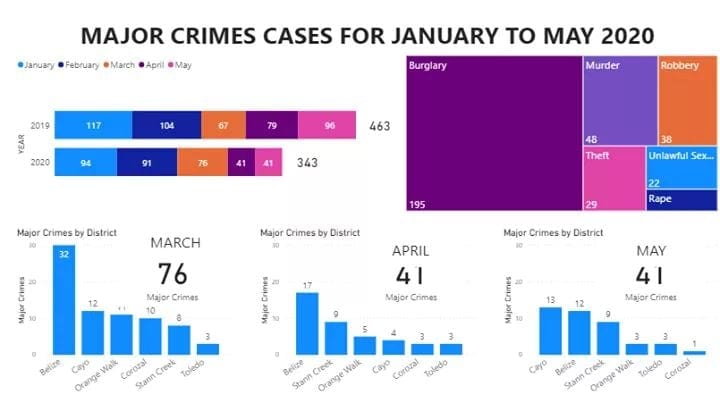 By Aaron Humes: A combination of dogged police work and the clamping effect of the State of Emergency and associated curfew has led to a drop in police-recorded major crimes in the Belize District for the second month in a row, as part of an overall fall nationwide.

Major crimes, defined as murder, theft, robbery, burglary, rape and unlawful sexual intercourse, were counted as 41 for the month of May – exactly as many as reported in April. Overall, just 343 overall reports were made compared to 463 in January to May of 2019.

The reduction is starker in the Belize District, which recorded just twelve major incidents in May, one less than Cayo’s 13, and a drop of 30 percent year over year from 2019.

The largest declines, relative to the same time last year, have been recorded in the northern districts: Corozal and Orange Walk. Conversely, the Toledo District has recorded the largest relative increase — although major crime cases held steady at 3 per month during the period of March to May 2020. In Stann Creek, there has been a marginal increase over the last 3 months and a 22% decrease for the period January to May 2020 relative to the same time last year.