By Aaron Humes: Activist Yaya Marin Coleman has released a “privileged and confidential” letter from the Police Department, refusing a permit for a protest supporting Black Lives Matter near the United States Embassy in Belmopan next Monday.

Police have twice broken up meetings organized by Nigel Petillo in the Cotton Tree community over land issues in the last month.

The Black Lives Matter movement was started in the wake of the deaths of Michael Brown and Trayvon Martin and has called for various reforms.

Protests have been ongoing in the U.S. since the May 25 death of George Floyd in police custody in Minneapolis, Minnesota, and have spread around the world, joined occasionally by violence and looting. 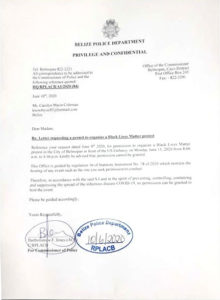