“COVID-19 to reduce tourist arrivals in the region, Belize and others especially at risk,” says Moody’s 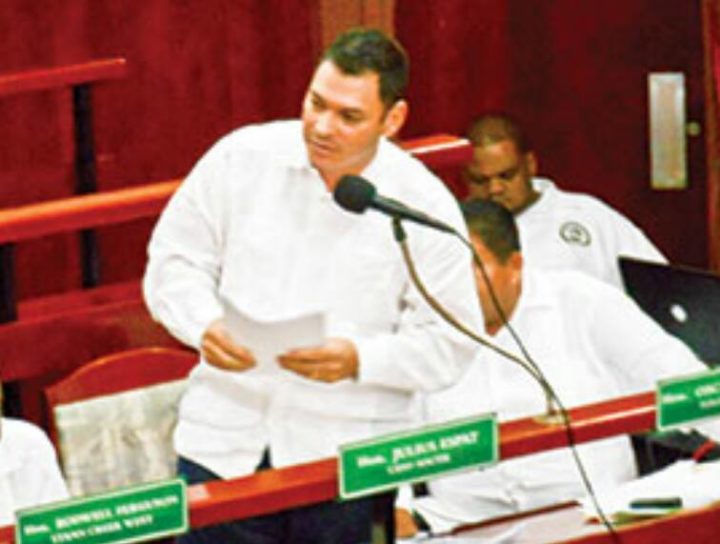 By Aaron Humes: It is not truthful, Cayo South area representative Julius Espat told reporters on the sidelines of today’s meeting of the House of Representatives this afternoon, that because the ex-Chief Justice Kenneth Benjamin has not delivered a written judgment in his case in January, that there is no decision or a ‘non-decision’ as claimed by Prime Minister Dean Barrow this morning.

Espat reminded that the Prime Minister’s actions were not only found to be illegal, but he faces criminal sanctions under the Finance and Audit Act, so how could the case, in his words, “have disappeared into thin air.”

His colleague Kareem Musa told us that the 44-page sessional paper submitted had little specifics and was a clear attempt in the tradition of the Petrocaribe Loans Act and Government Contracts (Validation) Act to “make legal what was clearly illegal.” He added, “The only reason the Prime Minister is here today is because he was forced to come here; because there is, in fact, a judgment, as much as he says that there is a non-decision. Imagine that! Had he shown up to court like a proper defendant, and listened to the Chief Justice’s decision, he would have known he was wrong, that he broke the law, and that he had to come the way he did today…”

Musa added that the court keeps a transcript of proceedings and added that the Chief Justice’s contract has not been renewed, wondering whether the result of this case has anything to do with it.

And he distinguished between cases where, as he admits, Benjamin has given neither oral nor written judgments, of which we are told there are still at least a dozen. The Guyanese is still living in Belize and was out and about as of last week, we are told.

But might the People’s United Party be forced to start all over again? Espat said he is prepared to do so if necessary. “The People’s United Party is making a commitment to the people of Belize that we will see this case to the end, in whatever way we can legally. That means what the attorney here says (referring to Musa) is what we do, that is what we have to do; if that means we have to go again we will go again; if that means we have to go all the way to the CCJ, we will not stop until we get a judgment.”

But the requisitioned legislation to amend the Constitution, Musa says, needs liaison with the Opposition to succeed if the Government is willing.