Belize to receive US $97,000 for complementary climate funding 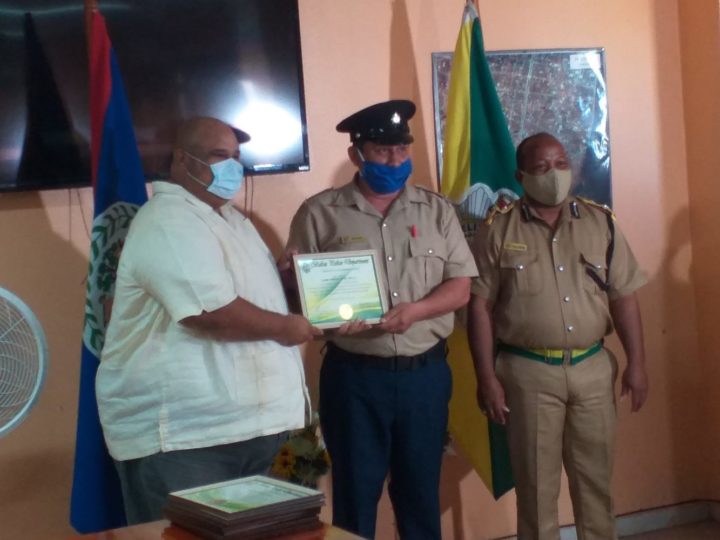 By BBN Staff: Today, the Belize Police Department held a ceremony at the Raccoon Street Police Station to honor officers from Precinct 4 (Belama area of Belize city) for their commendable work in keeping crime down in that area; two among those officers played instrumental roles in apprehending the men who robbed the Scotiabank Belama Branch last week.

For security reasons, Commissioner of Police Chester Williams requested that the names and faces of the officers who were a part of the bank robbery operation not be published, noting that the officers have already received death threats from criminal elements in the city.

Nonetheless, Williams commended the officers and the rest of the Quick Response Team for their outstanding police work.

“These police officers came under fire by these robbers and despite that, they ensured that they continue the pursuit until the robbers were caught, even though their own lives were in danger and they were outnumbered by these robbers. For us, that is exceptional work…”

Apart from certificates of appreciation, the two officers were also promoted from Constables to Corporals. Williams said that hosting the award ceremony is important because police need to be commended for doing good deeds with the same level of energy that they are met with when they are reprimanded for wrongdoing.

On the afternoon of July 2, five men robbed Scotia Bank’s Belama branch of $20,000 and were attempting to escape when the officers caught up with them and, after an exchange of gunfire, captured them. Two of the robbers were shot during the shootout and one of them, Gasman Young, died while undergoing treatment at the Karl Heusner Memorial Hospital.