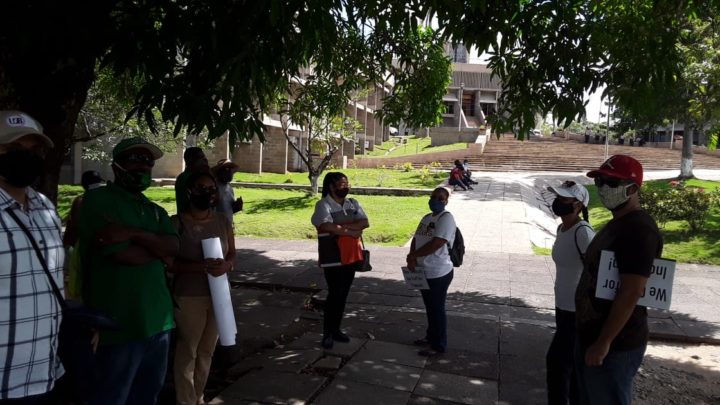 By Aaron Humes: What was the University of Belize Faculty and Staff Association (UBFSA) is now a trade union – or will be once the paperwork has been signed off on.

But status or no, says President Dr Pio Saqui, they will not be deterred from standing up to the University’s administration.

At a rally on Thursday, Dr Saqui said: “We have not been invited to the table to negotiate because we do not have a paper. That is disrespect. Does that mean that overcomes my ability to see numbers and say that is accurate or not? A piece of paper doesn’t determine that.   We will stand our ground. We will demand respect. We are going to get it. No matter how long it takes. We are going to get it. We will follow due process.   We know that fact is what speaks truth. Like they say, white man [lie], black man [lie], but black and white nuh tell no lie. And that is what we need to see.”

So where is the Union’s ‘black and white?’ It’s coming, Dr Saqui told us: “We are rectifying that right now. We actually have a meeting with the Ministry of Labour and we are hoping that we can fix that as soon as possible. But in fact, we nonetheless have the right to be the sole bargaining agent for the faculty and staff of the University of Belize. That letter states it clearly. It doesn’t matter which way you look at it.”

President Smith noted that the BNTU does have a few long-standing members teaching at the University, and it was planned that all who could be invited would join the main Union. But it was decided that the former Association would be converted instead. “We thought that since they already had the Association, then for them to go ahead and have the right to bargain – collective bargaining agreements and so on – that a Union does and so they thought it would be best for them to move over from the Association to the Union to give them a little more bargaining power as it relates to staff.”

The Association was mainly for faculty, but the Union will be able to bargain for staff.

And Smith suggested that the Ministry and University were trying to delay, as the Ministry had already cleared the Union through all requirements as of January, and all that was needed was to sign the certificate by the head of the Tripartite Body – otherwise, they have all rights to proceed with their work.