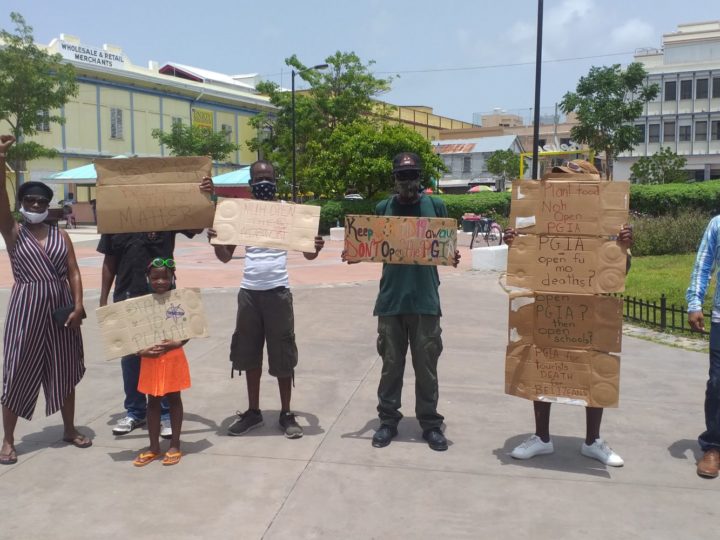 By BBN Staff: A small group of people has gathered at the Battle Field Park in Belize City to protest the Government of Belize’s decision to reopen the Philip Goldson International Airport (PGIA) on August 15.

The small number of participants did not subtract from the passion that each of the protestors showed as they raised their signs and spoke to whoever would listen. Passing vehicles have also been seen honking their horns in support of the protestors and their message.

Makeada Marin, one of the organizers of the protest, stressed that the opening of the airport is not in the best interest of Belizeans on a large scale and she felt compelled to make her voice heard.

“Why did we close the airport and he borders in the first place? And why were Belizeans allowed to leave their homes? It was because the airport was closed. If we reopen and more corona cases come in we will go back into lockdown and people will not be able to feed their families,” Marin said.

The group noted that it will also be circulating a virtual petition and encouraged all like-minded Belizeans to sign it, so that authorities can know the concern for public safety is real.

As Belize plans to reopen, the pandemic rages on with thousands of new cases being confirmed daily, all over the world. In the United States, the country which represents around 67 percent of all tourists coming into Belize, the situation has gotten so bad that states which lifted their lockdowns have been forced to reinstate them. The US now has over 3 million cases of COVID-19  and over 136,0000 people have died as a result.