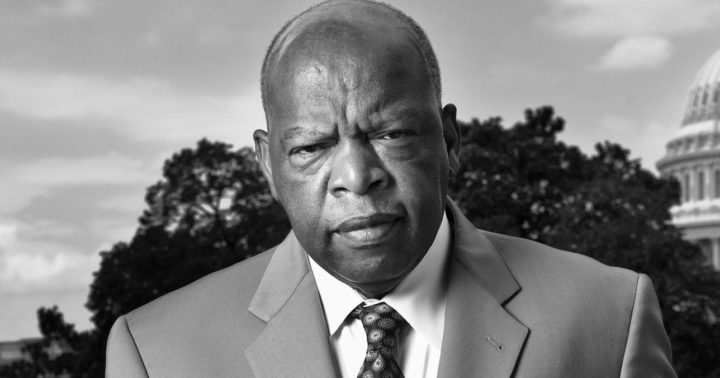 By Aaron Humes: President Donald Trump has ordered all U.S. flags on all American installations worldwide including the U.S. Embassy here to be flown at halfmast for the remainder of today, Saturday, in commemoration of the life of late Congressman John Lewis, 80, of Georgia.

Lewis, who died of cancer, was the last of the “Big Six” civil rights leaders, which included Martin Luther King Jr, and helped organise the historic 1963 March on Washington. He died on the same day as another, Reverend C.T. Vivian, 95.

The BBC says former US presidents and foreign leaders have joined the tributes to civil rights icon Lewis, led by President Barack Obama.

Mr Biden said he had spoken to the former congressman, who had been suffering from pancreatic cancer, in the days before his death.

“His voice still commanded respect and his laugh was still full of joy. Instead of answering our concerns for him, he asked about us. He asked us to stay focused on the work left undone to heal this nation.”

“Not many of us get to live to see our own legacy play out in such a meaningful, remarkable way. John Lewis did,” President Obama said. “And thanks to him, we now all have our marching orders — to keep believing in the possibility of remaking this country we love until it lives up to its full promise.”

His predecessor George W Bush said Lewis had “worked to make our country a more perfect union”, while Bill Clinton described him as “the conscience of the nation”.

Former US presidential candidate Hillary Clinton praised Lewis, whom she described as “the truest kind of Patriot”.

Martin Luther King III, the eldest son of the civil rights activist, told CNN: “From a historical standpoint, there are few who are able to become giants… John Lewis really became a giant through his examples that he set for all of us.”

Trump, whom Lewis had publicly criticised, has not publicly commented on his death so far, but his proclamation made note of Lewis’ long career in public service.

White House press secretary Kayleigh McEnany described Lewis as “an icon of the civil rights movement, and he leaves an enduring legacy that will never be forgotten”.