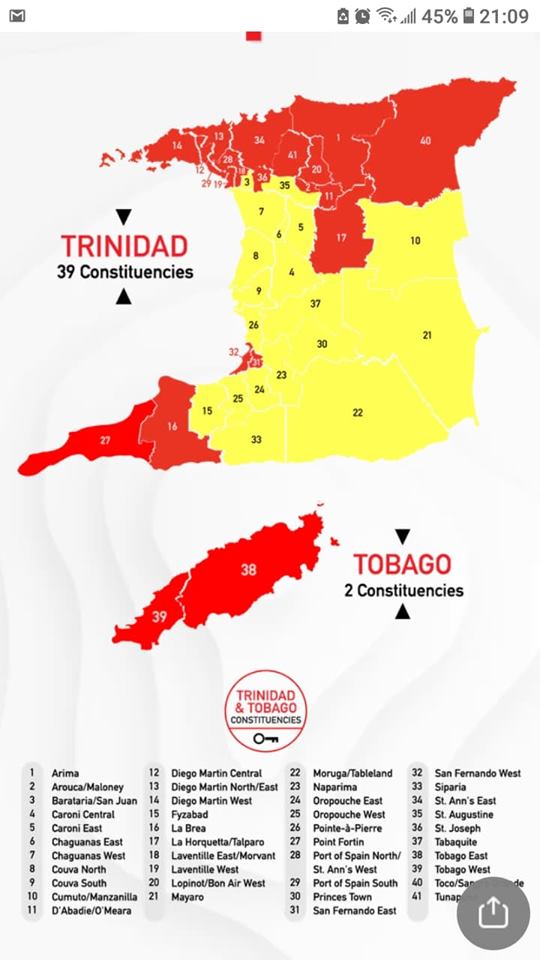 By Aaron Humes: The People’s National Movement (PNM) of Prime Minister Dr. Keith Rowley is projected to have won re-election in General Elections held today in Trinidad and Tobago.

With 23 seats before the election, the PNM were projected by Trinidad media to have held on to 22 of them, with nearest rivals the United National Congress (UNC) on 19. At least 17 other parties contested the election.

Speaking on national television from PNM headquarters, Balisier House in Port of Spain, Dr. Rowley repeated the PNM’s party chant: “Great is the PNM, and we shall prevail!”

But he also paid tribute to voters, election staff and the press for a smoothly running election, one of the first among major countries in the Caribbean. Guyana saw much controversy in their election in March, which ended in an Opposition win; Suriname overturned the long reign of strongman Desi Bouterse and St. Kitts and Nevis re-elected its government in June.

Jamaica, St. Vincent and the Grenadines and Belize all have elections due later this year.

Rowley pledged to the young people of Trinidad and Tobago that he would “digitize the country” and bring in more young people to Cabinet.

He reminded that no matter tonight’s result, the twin-island republic remains one people, with one Government.

Social distancing was being observed at both Balisier House and the UNC headquarters in Couva from where Opposition Leader Kamla Persad-Bissessar was expected to address supporters later.