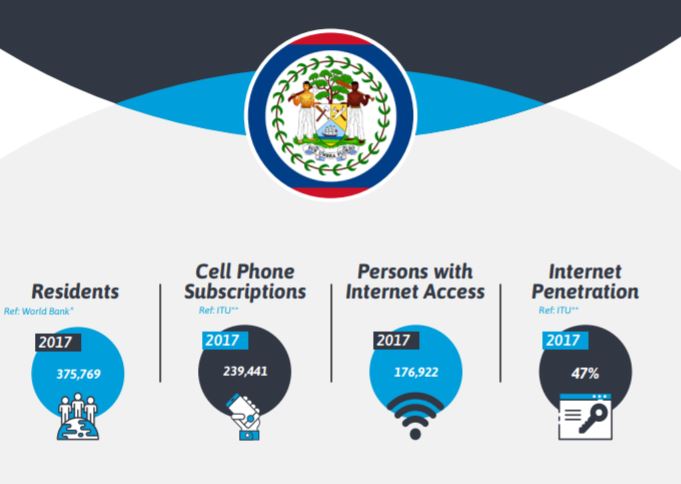 By BBN Staff: The Inter-American Bank and the Organization of American States, in its latest annual report of Cyber-security in Latin America and the Caribbean, highlights that cyber-security in countries like Belize and others in the region, is severely lacking with some governments having made modest progress and others still lagging behind in this area. It also provided data showing of Belize’s estimated 375,769 population over 239,441 citizens have a cell phone subscription and 176,922 have internet access with a penetration rate of 47% as of 2017.

Cybersecurity policies are fundamental to protect citizens’ rights in the digital realm—including privacy and property ownership—as well as to strengthen their confidence in digital technology and comfort in its use. Online crime amounts to about half of global property crime, the report noted. The economic damage caused by cyberattacks is estimated to be more than 1 percent of some nations’ annual gross domestic product (GDP), while some attacks on critical infrastructure could cause damages reaching 6 percent of annual GDP.

This study shows that the Latin American and Caribbean (LAC) region is not sufficiently prepared to handle cyberattacks. Only 7 of the 32 countries studied have a critical infrastructure protection plan, while 20 have established cybersecurity incident response teams. This limits their ability to identify and respond to attacks.

Twenty-two of the countries studied are considered to have very low capacity to investigate cybercrime, while they also greatly struggle in the criminal trial process. Some of the difficulties are due to the legal framework: one-third of the countries do not have one for dealing with cybercrime, and only five have ratified the Budapest Convention, the leading framework for international cooperation in dealing with cybercrime. In the case of these borderless crimes, international cooperation is key to success.

It noted that Belize is currently developing a national cybersecurity strategy through a multistakeholder process, namely, the National Cyber Security Task Force (CSTF).

Regarding cybersecurity education and trainings, the offering remains in the hands of the private-sector firms that provide trainings. There are no cybersecurity degrees at Belizean universities, although the Faculty of Science and Technology of the University of Belize does offer a bachelor’s degree in information technology.

In order to develop a stronger cybersecurity mindset, the Central Information Technology Office (CITO) promotes cybersecurity awareness among different government institutions by sending out monthly surveys with cybersecurity tips and best practices. CITO has also developed a survey that intends to improve the reporting of cyber incidents among public institutions.

The IT Unit of the Belize Police Department has also made considerable efforts to improve their incident-response capabilities through the development of a forensic laboratory. Currently, Belize has four laws that relate to cybersecurity: (i) the Telecommunications Act, (ii) the Electronic Evidence Act, (iii) the Intellectual Property Act, and (iv) the Interception of Communications Act, but has no privacy and data protection legislation.90 Additionally, the Belize Police Department has a partnership with the Internet Watch Foundation in order to report cases of child pornography. However, the lack of comprehensive cybercrime law hinders the prosecution of cyber-related crimes.91 There is a need for updating of the country’s legislation and law-enforcement framework to be able to criminalize and prosecute such crimes, and the government has been analyzing cybercrime laws from similar countries in order to develop their own national legislation that allows for a more thorough prosecution of cyber-related crimes.

The Inter-American Development Bank (IDB) is working closely with LAC governments as well as with multilateral organizations such as the Organization of American States (OAS) to tackle these challenges. Given the growth the cybersecurity sector is experiencing globally, policy development in LAC countries offers economic opportunities, especially under current conditions caused by COVID-19 and as the region begins to revitalize its economy in its wake. The application of cohesive cybersecurity policies will allow the region to enjoy the benefits of the fourth Industrial Revolution, with the goal of protecting citizens and boosting economic activity.