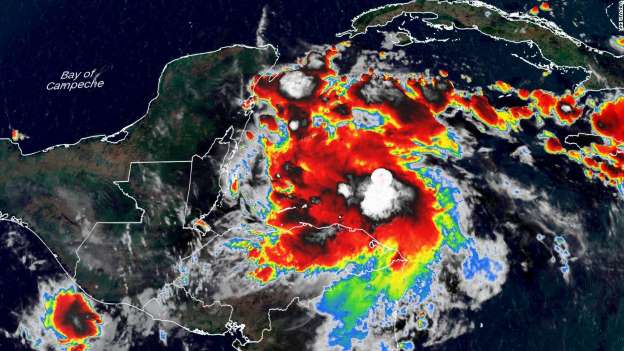 By Aaron Humes: Tropical Storm Nana is getting closer to the coast of Belize and is still projected to become a hurricane before landfall between tonight and Thursday morning, according to the National Hurricane Center in Miami, Florida.

As of 3 p.m. Belize time, Nana’s center was 155 miles east-southeast of Belize City, still carrying winds of 60 miles per hour.

It is moving west at 15 miles per hour and a westward or west-southwestward motion is expected tonight and Thursday.

Nana’s track will take it near but north of the Honduras coast and Bay Islands later this evening, and the center should make landfall on the Belize coast later tonight into early Thursday. While Nana has not strengthened during the past several hours, strengthening is expected before landfall, and Nana could become a hurricane by the time the center reaches the coast of Belize.

Tropical-storm-force winds extend outward up to 70 miles (110 km) from the center, or roughly the length of the George Price Highway between Belize City and Benque Viejo Town.

A dangerous storm surge will raise water levels by as much as 3 to 5 feet above normal tide levels along the immediate coast near and to the north of where the center makes landfall.

Near the coast, the surge will be accompanied by large and destructive waves.

Nana is expected to produce rainfall of 3 to 6 inches, isolated totals of 8 inches in Belize and other areas. Belize remains under hurricane warning along the coast from Belize City south to the border with Guatemala, and a watch for the north coast up to the border with Mexico.

The next advisory is at 6 p.m. Belize time.