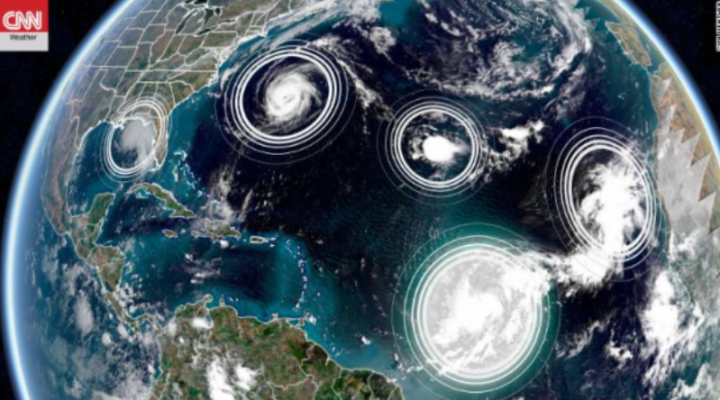 By Aaron Humes: At the peak of the Atlantic hurricane season, the Atlantic Ocean, Caribbean Sea and Gulf of Mexico are heavily active.

CNN reports that five active tropical cyclones are churning the area for the first time since this day in 1971 – nearly a half-century ago. The systems are Hurricane Paulette, Hurricane Sally, Tropical Storm Teddy, Tropical Storm Vicky, and Tropical Depression Rene, soon to be extra-tropical.

None of the storms are presently any threat to Belize, whose southern cone was struck by Hurricane Nana just eleven days ago.

The National Hurricane Center (NHC) in Miami, Florida is monitoring all the systems.

Hurricane Paulette landed in Bermuda earlier today, Monday, and is still impacting the island even as it moves away this evening.

Hurricane Sally is currently moving northwest through the Gulf of Mexico and is presently forecast to make landfall on the southern Gulf Coast late Tuesday or early Wednesday on the border of Louisiana and Mississippi. The NHC predicts seven to 11 feet of storm surge, characterized as “life-threatening,” surge from the mouth of the Mississippi River east to Ocean Springs, Mississippi, including Lake Borgne. Rising waters from the surge is expected to be felt as far west as Burns Point, Louisiana, and as far east as Saint Andrews Bay, Florida.

Besides storm surge, extreme amounts of rainfall are also forecast for some locations.

Widespread rainfall totals along the Gulf Coast from Louisiana to the panhandle of Florida are forecast to be between 6 to 10 inches; however, some cities could see up to 2 feet of rainfall. This amount of rainfall will lead to life-threatening flash flooding including major urban and river flooding as well.

Tropical Storm Teddy is currently in the central Atlantic, well over 1,000 miles east of the Lesser Antilles. Teddy is expected to strengthen to a hurricane over the next few days and to a major hurricane (Category Three or higher) as it approaches Bermuda.

Tropical Storm Vicky is currently over the eastern Atlantic, just a few hundred miles west of the Cabo Verde Islands. Vicky is the earliest 20th Atlantic named storm on record, breaking the previous record set by Tammy on October 5, 2005.

Vicky is expected to encounter unfavorable conditions in the next couple of days, which will limit its growth and intensification by Tuesday and cause it to dissipate before Friday.

If a 21st named storm, called Wilfred, forms, this season will likely become the second after 2005 to use the Greek alphabet to name storms. The season ends on November 30.