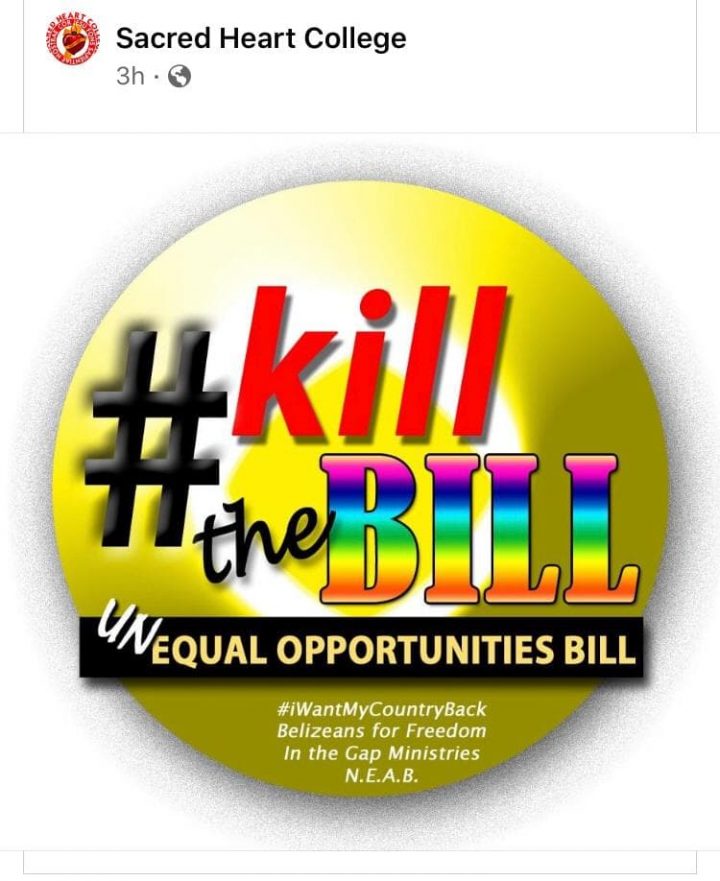 By BBN Staff: The Equal Opportunities Bill has sparked quite a controversy in Belize, with some Belizeans, including the LGBT community, supporting the Bill while at the same time generating much resistance from many Belizeans as well as the church and Christian communities across the country.

A short while after the churches launched their #Killthebill campaign, Sacred Heart College (SHC) in San Ignacio, Cayo, shared the #Killthebill flyer on their official school Facebook page. The post sparked major controversy within the San Ignacio community, especially among current and former students. A large number of students called out the administration for joining the #KilltheBill campaign when there was no effort made to gain consensus among staff and students. The post having been made by the Administrator of the page who is also the leader of SHC, prompted one student to call the institution a dictatorship. “As a student looking in you might think that all is well. But all decisions (are) made by one person…”, wrote the individual.

The consensus of the comments is that an institution like Sacred Heart College should not engage in taking sides, and far worse, promoting a campaign for, or against, such a bill, unless some consensus is sought. A current sixth form student felt that “as an educational institution your only job is to get conversations going, not to take a public stance on any issue”. There were a number of comments supporting the College’s post on #Killthebill, with some sharing the view that the Bill would provide penalties for those who discriminate against others.

A few of the students’ posts who are in support of the churches’ campaign noted that Sacred Heart College is a Catholic institution and as such the institution is in order to make such a post and cannot support the bill, particularly because of its issues with the LGBT rights. As far as BBN is aware, the Catholic Diocese of Belize has not publicly made a statement on whether it supports or does not support the Bill.

The controversial post was removed this morning by the College and a statement was issued apologizing for the post. “SHC is not taking sides on this. We regret the misunderstanding of the post, and apologize if it created a negative impression on anyone, as that was not the intention. We will continue to update you all as soon as we have any other updates. We are not saying that the entire Bill is bad, there are some aspects that need to be addressed in the best interest of everyone,” the College stated.

After a cabinet meeting yesterday, Cabinet decided to stall the Equal Opportunities bill which was scheduled to be tabled in the House of Representatives today.