Lessons from “Uncle George” on ninth anniversary: service and humility 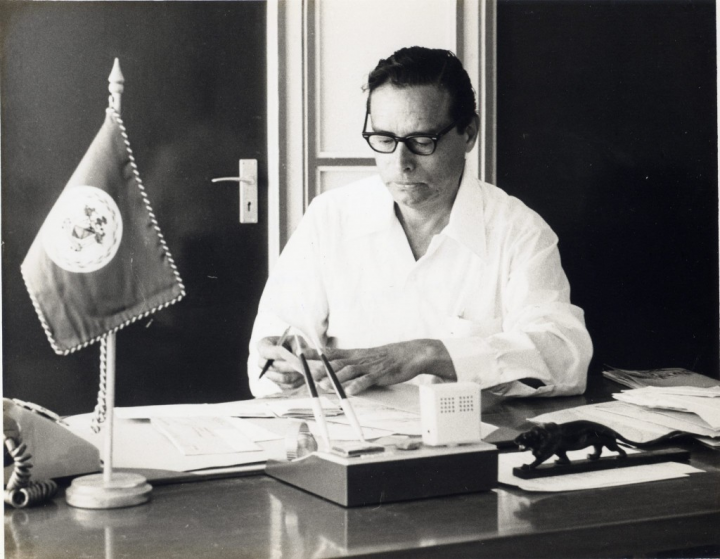 By Aaron Humes: Leader of the Opposition, John Briceño, says his primary emotion on this National Service Day is one of humility, as he stood before the grave of the Father of the Nation as leader of the party he built, on the threshold of bringing it, perhaps, back to Government.

“When you think of what Mr Price did and represents, you feel humble that you are leading the party that he spent his entire life working with. It humbles you, so that when you feel that your head is getting big, swollen up, and you are Mister-this-and-Mister-that, whenever you remember what he has done, it brings you back down on earth, and your feet on the ground, for you to realize that you need to live his example, to live what he lived for, which is to serve with humility, and to always serve the people of this nation,” he said after this morning’s ceremonies at Lords’ Ridge Cemetery.

A socially distanced crowd of party dignitaries – fewer than in recent years – observed as wreaths were laid on behalf of the City by Mayor Bernard Wagner; the family by niece and former parliamentarian Dolores Balderamos Garcia; and on behalf of the PUP by Briceño.

Absent due to his medical issues for the first time since the tradition began was ex-party leader and Prime Minister Said Musa, who sent his wishes through son and successor, Party Chairman Henry Charles Usher.

In his address to the gathering, Briceño recalled witnessing Price come to Orange Walk Town for a party meeting in 1979 as it defended its majority in the House of Representatives, and a rush of something he could not describe then, but can now: a sense of greatness and a confidence in a man who would soon lead Belize to Independence.

We all have stories like that, the Party Leader said, but whether dealing with the Queen or with a young Toledo boy, he treated all he met just the same, and thus he was able to call for national unity not only then, but now, a voice from beyond the grave watching over a nation wracked by COVID-19 and internal divisions.

And when the party marshals its forces to provide for constituents, that is following the George Price way of service to the people. As Senior Minister in 1998, sitting right hand to Musa, he told his Cabinet colleagues after the initial explanations of how Cabinet works: “As of today, you are no longer a PUP representative; you are a representative of the people. We in Cabinet are here to work for everybody; to help every single man, woman and child in this country to have a better life.”

22 years later, on the eve of “the most important election since 1979,” Briceño called on his colleagues to remember this in tackling an unstable economy, channel his spirit and ignore the naysayers and focus on the blessings and “wealth untold” we have.

Price is one of Belize’s two National Heroes (long-time rival Philip Goldson is the other) and the party has long campaigned to make his birthday, January 15, a national public and bank holiday.