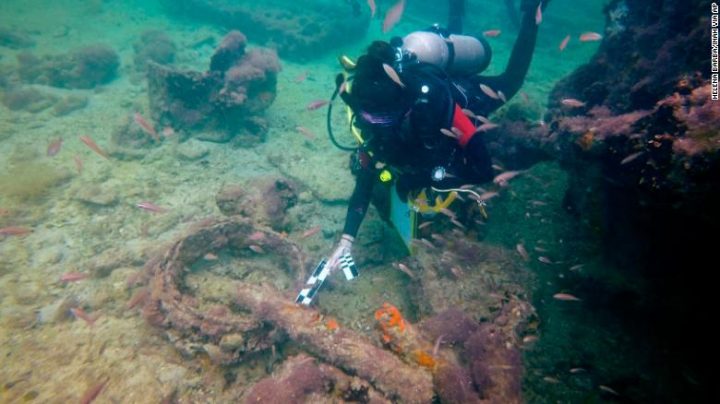 By BBN Staff: CNN reports that a team of Mexican archaeologists has finally uncovered that a sunken ship, found back in 2017, was used to transport Maya slaves to Cuba.

The team from Mexico’s National Institute of Anthropology and History (INAH), found the paddlewheel steamboat, known as “La Unión,” off the coast of the Yucatan peninsula in the Gulf of Mexico some two nautical miles from Sisal. Due to the condition of the wreckage, it took the team three years to identify the ship and its purpose. They confirmed the ship’s boilers as well as the wooden-hulled side wheeler which had been preserved. The team also found artifacts, including fragments of glass from bottles, ceramics, and eight brass cutlery used by first-class passengers on board.

INAH said that the La Unión was used to transport between 25 to 30 Mayas a month who were illegally captured and transported them to Cuba, where they were forced to work in sugarcane fields between 1855 and 1861. This was said to have taken place during the rebellion known as the Caste War.

Their investigation determined that the ship sank after the boilers exploded, setting it on fire and killing around 80 crew members and 60 passengers. INAH issued a press release after the discovery, noting that they could not determine how many slaves were on board at the time because they were listed as either cargo or merchandise as opposed to passengers. The release also said that the discovery confirms that the slave trade continued even after Mexico abolished slavery in 1829.

“For researchers … the discovery is highly relevant,” INAH said in the release. “Beyond the difficulty in identifying a wreck by name, it also speaks to an ominous past for Mexico that should be acknowledged and studied in terms of its context and time.”