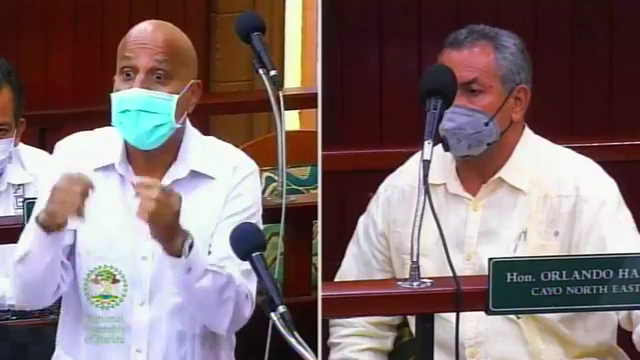 By Aaron Humes: PUP Cayo Northeast area representative Orlando “Landy” Habet is leading the charge concerning questions on why the Government halted the informal trade of cattle with Guatemala.

But at the moment, farmers actually have too many heads of cattle on hand, and with exports struggling, the sector is in crisis he revealed. According to Habet, farmers have been affected shortage of rain this year, and with the cool season approaching the growth of grass in pastures will slow down even more.  And Habet claims that as the dry season approaches, pastures will dry out even more, water ponds may dry up and the crisis faced by cattle farmers is expected to worsen.

Twenty Seven heads of cattle were exported formally to Guatemala a few months ago, and another 246 to Mexico through Blue Creek, but the profit margin was $98.50 after 15 months of fattening, which he said was unsustainable.

Moreover, according to Habet, the buyers, Su Carne, apparently have yet to pay up nearly a month after the purchase. Reports suggest, he added, that there are exchange issues with the Central Bank of Belize which may be holding up the payment.

And the Eastern Caribbean is not necessarily an answer: Grenada and Antigua, their concerns about potential diseases notwithstanding, cannot together buy even 2 percent of Belize’s output (their population combined is just over 200,000).

The Ministry’s own figures suggest a surplus of 30 to 40 thousand heads of cattle after 11,500 were exported for the course of the year. Even with another export to Mexico of 240 per month, there could be a loss of up to $21 million in livestock sales if exports do not increase significantly.

“This administration has not helped the farmers; they speak it, but they do not do it,” Habet concluded.

But the Prime Minister countered that illegal is illegal: “Part of your problem is that when you promote this illegal trade, you are saying that you do so for several reasons including the fact that there are no controls. There are no tax controls, there are no foreign exchange controls, there are no money laundering controls. How could you people – that it was happening for years and years is neither here nor there. COVID came, it could not take place in the COVID atmosphere, but bigger than that, it ought to have stopped a long time ago.”

By that logic, the Prime Minister added, if drugs could be sold informally, would the Opposition agree?

The Prime Minister said that the Mexican importer Su Carne has indicated that it will purchase every single live animal that Belize wishes to export. But they have warned, he added, that they would pull their business if the informal trade restarted, as some Mexicans purchased illegal cattle from Guatemala that originally came from Belize.

There is also pressure from the U.S., with which Mexico and Canada are joint partners in the new North American Free Trade Agreement (NAFTA). They have warned Mexico that if any illegal sale of cattle from Belize takes place, both countries will pay a price.

And the Prime Minister added that the buyers are hoping to get past quarantine and buy directly from smaller farmers. “This is the only way to go…and will result in everyone getting a break,” he concluded, particularly the small farmers.