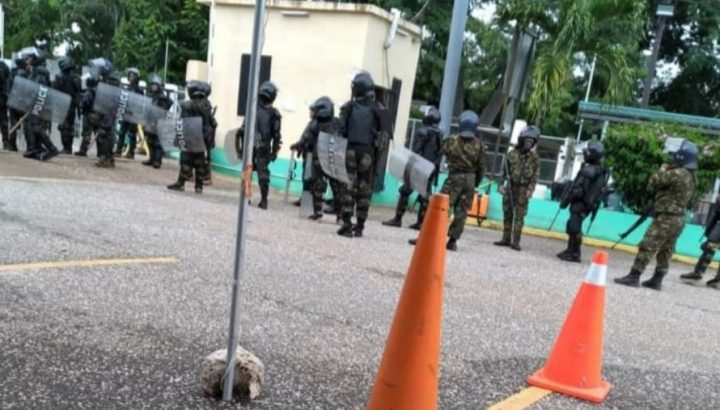 By Aaron Humes: Defying closed borders and the threat of COVID-19, a caravan of 3 thousand Honduran migrants are making their way, by fits and starts, through Guatemala and Mexico on their way to the United States.

Belizean authorities are on high alert in the event that members of the group attempt to enter Belize at the Western Border. Members of the Police Department riot squad have been seen practicing on the ground.

The caravan left on Thursday, October 1, entering Guatemala at different border points. Some dispersed through the Department of Izabal and others to Peten. They have since broken up into smaller groups and reports are that there were violent confrontations in some locations last night, with Guatemalan police being attacked with rocks. Larger groups are said to have gotten past the police barriers.

Some 700 are said to have gone the route of Canchacan, Peten while another group went the route of Rio Dulce, Izabal, but they are breaking up into smaller groups, the largest so far being 150.

Historically, Honduran migrant caravans have entered Mexico not through Belize but at Mexico/Guatemala entry points. Some 500 were detained and are at the Corinto border point expected to be sent back to Honduras per Guatevision.

Mexico has already placed elements on the ground to deter entry of the migrants. Meanwhile, in Honduras, authorities are also trying to dissuade such departures by telling migrants that they will face even more prejudice than before in Guatemala and Mexico due to the COVID-19 pandemic.

This caravan largely disrespected sanitary protocols for the prevention of the spread of Covid-19 in the hardest-hit countries in the region.

Guatemala imposed a state of prevention in six of its departments to detain and return migrants, and assured that it will not allow another entry through the borders with Honduras on October 2. According to the Guatemalan Migration Institute (IGM), 3,000 more Hondurans will come tomorrow. During the day a person died under the tires of a trailer.

Small groups of migrants have begun arriving at the Mexican border, where they cross in small boats across the Suchiate River.