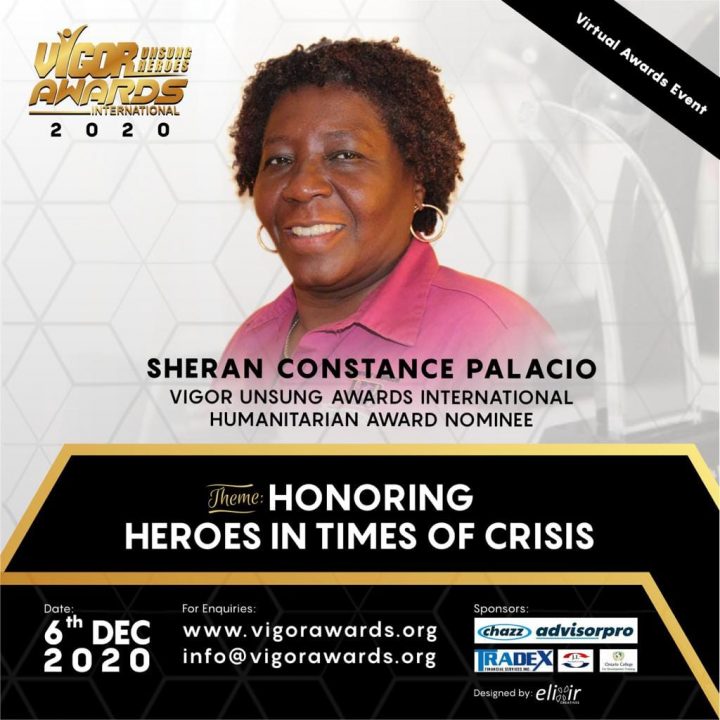 By Zoila Palma: Belizean Professor, Sheran ‘Sharon’ Palacio has been nominated for an international humanitarian award for unsung heroes. The awards, referred to as the Vigor Unsung Heroes Awards International (VUHA), celebrate heroes from around the world and are meant to spread light on the world’s greatest people. The awards recognize everyday heroes who engage in simple acts of kindness to make the world a better place and ask for nothing in return. In recognizing these heroes, VUHA aims to build a thriving and motivating culture of giving.

Palacio was nominated for the award after organizing the celebration of Africa Day for the first time in Belize on May 25, 2020. The celebration was held under the theme “Promoting Africanism, Connecting the Dots and Changing the Narrative” and Belize’s celebration was recognized by several networks. Palacio then moved on to organize the Africa Youth Festival in Belize and she was interviewed on the Queen Amina show, operating out of the United States.

Palacio has also been the driving force behind Youth for World Peace, and its brainchild the Diabetes Run which has been held annually for six consecutive years, and these activities helped propelled her to be nominated for the prestigious award.

In an interview with Breaking Belize News (BBN), Sharon Palacio said “I feel very honoured to have been nominated for this Vigor Award and this nomination gives me more reason to continue the promotion of Africanism in Belize”. Palacio notes that it is her desire to continue connecting the dots and changing the narrative as she continues to “fight against diabetes, empower youths, advocate for the elderly, promote opportunities for the less fortunate and create linkages for a lifetime”.

Palacio, a psychologist by profession hails from Punta Gorda and is the only girl among 6 male siblings. She now resides in Belmopan after retiring from the University of Belize.

According to VUHA “the award winners are diverse groups of people from various backgrounds and ethnicity who have one thing in common: soulful kindness and selflessness, apparent through hard work and dedication to others”.

The award ceremony will be held under the theme, “Honoring our Heroes in Times of Crisis” and will be hosted virtually by VUHA on December 6, 2020 at 5 p.m.

As she sets her eyes on receiving the first award of her lifetime, Palacio pays tribute to the inspiring words of Mahatma Ghandi “there is enough in this world for every mans need but not enough for every mans greed”.