More women are engaged in politics but not in political office

7 prisoners still at large;  Consider them all armed and dangerous 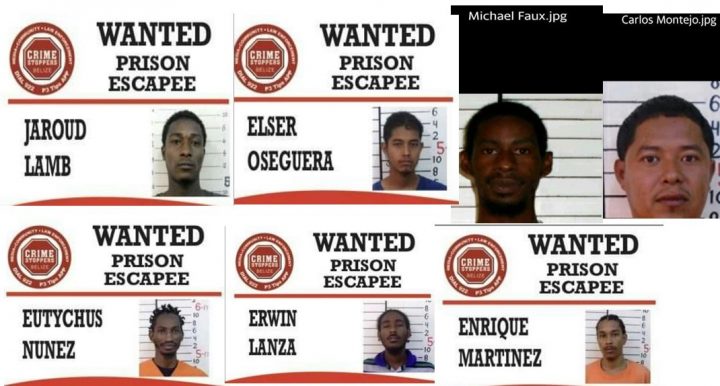 By Aaron Humes: Police and prison authorities continue to track seven outstanding escapees of 28 who broke out of the Hattieville Central Prison twelve days ago.

On Thursday, Kendale Flores, accused of the murder of four-year-old Kia Herbert earlier this year, was recaptured.

Among the seven still on the loose are two convicted murderers: Michael Faux, convicted in the death of Sidney Bradley, and Jaroud Lamb, convicted in a robbery turned to murder in Belmopan in 2013.

The others are Enrique Martinez, convicted of manslaughter; Erwin Lanza, convicted for a firearm offense; Eutychus Nunez, convicted of a previous escape from unlawful custody; Elser Oseguera, a convicted robber; and Carlos Montejo, another convicted robber and the alleged co-mastermind of the breakout. Montejo was also charged in 2010 as one of 4 with engaging in an illegal fight, a fight that resulted in his friend Efrain Ramirez getting his throat cut.

Chester Williams, Commissioner of Police, expressed hope that if they are not getting the support they would need to continue to evade the law, they will be caught and brought in. Police are on the ground and running down tips from the public.

The Police have expanded their net as recent escapees were caught on the Valley of Peace Road, Cayo District, and in Placencia, Stann Creek District; in the latter case, the escapees surrendered, admitting hunger and weakness. Commissioner Williams expects that the others are the same and that will help the Police maintain their intensity despite being stretched thin.

Prison CEO Virgilio Murillo told the media this week that he doesn’t underestimate any of the escapees and warns the public to consider them all armed and dangerous, and added that “desperate people do desperate things.”