NEMO reminds that flood warning remains in effect for the country 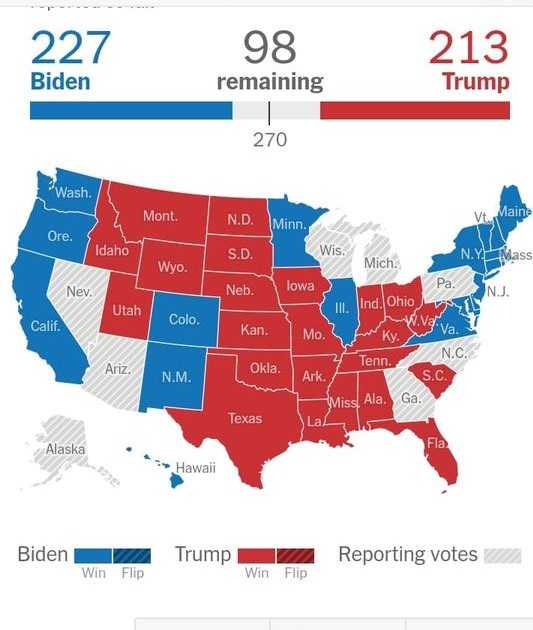 By Aaron Humes: The battle lines are being drawn after a tighter-than-expected general election in the United States of America held on Tuesday.

Counting continues in the states of Arizona, Nevada, Wisconsin, Michigan, Pennsylvania, Georgia and North Carolina, all critical to either side winning.

A majority of 270 votes in the Electoral College is necessary to win the Presidency.

The BBC https://www.bbc.com/news/election-us-2020-54791113 says both sides are claiming paths to victory, but President Trump roiled the waters with a statement early Tuesday morning at an election night gathering at the White House, claiming there was “major fraud” and “we’ll be going to the US Supreme Court”, again without providing evidence. He later alleged in a tweet that there had been “surprise ballot dumps”, causing his lead in several states to disappear, without providing any evidence. Twitter labeled the tweet as possibly disputed and misleading.

Biden has been urging caution and patience, tweeting: “We won’t rest until everyone’s vote is counted.”

That may take longer than expected with some key cities not reporting much of their vote, and in Pennsylvania, a shower of mail-in and absentee balloting resulting in announcements being delayed until Friday.

Observers say Trump overperformed his targets to hold the states of Florida, Ohio and Missouri, all considered must-win, while Biden appears to have hit some key targets such as Arizona, Wisconsin and Michigan. But it all depends on the continuing vote count.

Meanwhile, the Democrats are expecting to hold their majority in the House of Representatives, and the Republicans the same in the Senate.

Election night did see a number of firsts https://www.bbc.com/news/election-us-2020-54804080 – including the first black openly LGBTQ people ever elected to Congress and the first openly transgender state senator, per the BBC. Democratic Senate gains in Colorado and Arizona have so far been canceled out by a flip in Alabama and senior Senators being returned in Kentucky and South Carolina.

The Democrats have focused their campaigns on controlling the spread of Covid-19 in the US – which has had the world’s highest death toll and number of infections for much of the pandemic. Republicans, meanwhile, have largely campaigned on economic issues.