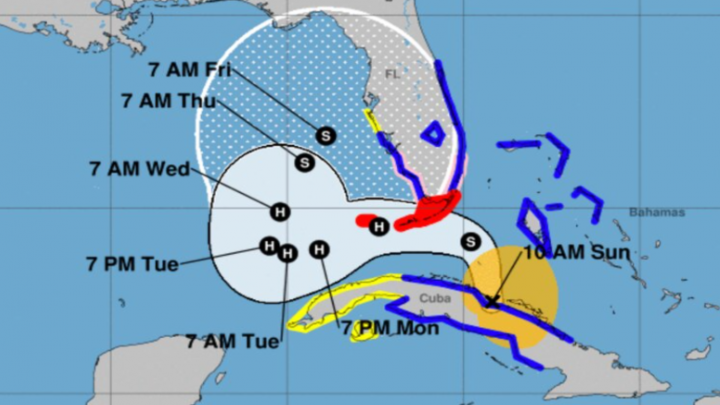 By Aaron Humes: Regenerated Tropical Storm Eta has left devastation and death in its wake from southern Mexico to Panama, and is now battering Cuba with high winds, heavy rain, dangerous storm surge and flash flooding, the BBC reports.

In Mexico, officials in the southern state of Chiapas said the storm had claimed at least 20 lives.

A majority of the dead and missing are reported in Guatemala, with as many as 150 claimed.

Of these, Guatemalan President Alejandro Giammattei said around 100 people were feared dead in Quejá in the central region of Alta Verapaz alone. Some of the houses in Quejá are under 50 feet of mud.

The U.S. National Hurricane Center (NHC) said the storm was passing over Cuba with sustained winds of 65mph, expected to head over southern Florida where a hurricane watch and tropical storm warnings are currently in place.

Cuba faces “significant, life-threatening flash and river flooding” while a dangerous storm surge will raise levels by as much as two to four feet above normal tide levels along the coast.

Cuban President Miguel Díaz-Canel tweeted on Saturday that “in the face of Eta, there is no time to waste and protection is the priority”.

Storm Eta made landfall in Nicaragua on Tuesday as a Category Four hurricane with winds of 140mph and torrential rains. It then weakened into a tropical depression as it moved into neighbouring Honduras and later Guatemala.