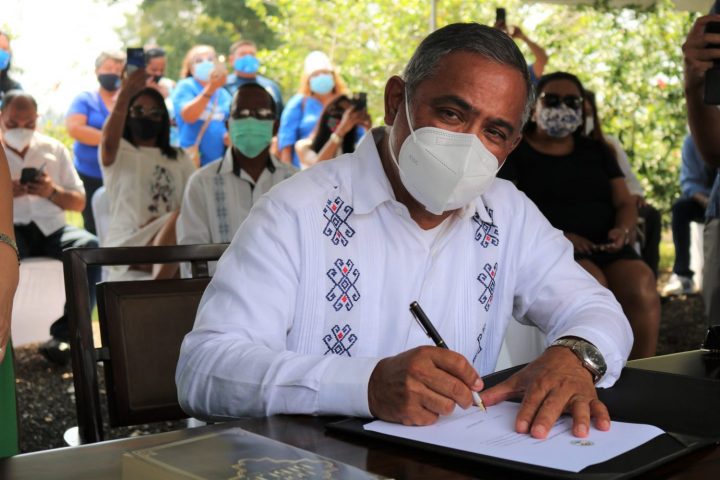 By Zoila Palma Gonzalez: From farmer to successful businessman to Minister of Government, then Leader of the Opposition, Belize’s first out-district Prime Minister, John Antonio Briceño has broken barriers in Belize. He is a vivid example of what a young man from humble beginnings can achieve.

Born on July 17, 1960 in shuga-city (ie. Orange Walk town), Orange Walk district, Briceño grew up working alongside his father Elijio Briceño in the family owned cane fields and cattle farm on the outskirts of Orange Walk town.  He later acquired the properties from his father and continues as a cane farmer and cattle rancher up to this day.

Briceño first entered electoral politics in 1993 when he was elected to the National Assembly as the representative for the Orange Walk Central division. Then in 1994 he ran in the municipal elections in Orange Walk Town and served as a member of the Town Council for two terms from 1994 to 2001.

Briceño served as Deputy Party Leader from 1996 until 2008 when he resigned and offered himself as a candidate for Party Leader.

During his years as Deputy Party Leader, Briceño and the PUP won national elections in 1998 and in 2003 and under his leadership in the northern region, the Party won more than 50 percent of their seats in the national as well as in local elections.

Briceño has also served as Deputy Prime Minister from 1998 to 2007. On February 8, 2016, Briceño again became Leader of the Opposition in Belize.

Now, after 12 years in political wilderness, Briceño managed to bring the PUP back to Belmopan with a resounding victory for his party garnering 26 of the 31 seats in the House of Representatives.

Prime Minister John Briceño was officially sworn in on Thursday, November 12 and it was announced on Friday that he will serve as the Minister of Finance, Economic Development and Investment.

Breaking Belize News wish John Briceño and his government well in managing the affairs of Belize over the next 4 to 5 years.