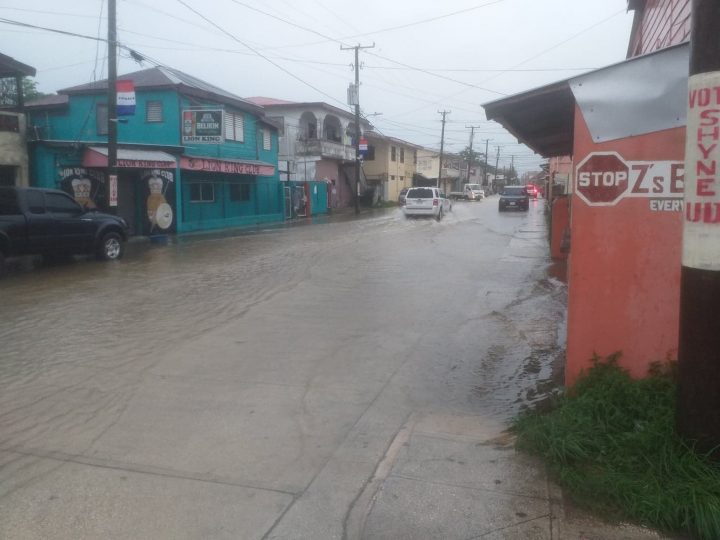 By Aaron Humes: On Wednesday, the center of the country including Belize City saw as much as five inches of rainfall thanks to a regressive cold front passing over the country.

As usually happens in these circumstances, low-lying City streets were quickly flooded, but after the rain stopped later on the water ran off almost as quickly.

Deputy Mayor Michael Noralez, who is also in charge of the City Emergency Management Organization (CEMO), admits that while the downpour was unexpected, quick action by City Hall ensured it did not get too bad for the City’s residents: “I took a tour during the storm, and I noticed that water started building up around Vernon Street, the Pound Yard area, and some of the other areas that we were working on earlier. So, what I did, I made sure I got my guys out to go out there, monitor the situation and were pleasantly surprised that by midnight last night, water was off the street. So, it simply means the remedial works that we’ve been doing, the infrastructural works that we have been doing with the drains are working. So, I’m happy that the city was dry this morning, and I think the Mayor called us out and said good job guys, but I’m just glad the rains held up a bit.”

Noralez added that the Council has been actively digging out clogged drains such as in the Antelope Street area and streets in the Coral Grove subdivision. One problem they have identified is the dumping of garbage in the drains: “We noticed too that as soon as the outlets are cleared, people have a tendency to – because you have to get rid of garbage. But I would advise them, instead of dumping the garbage, just indiscriminately, don’t be afraid to give us a call at the Council, and we’ll accommodate. We need to, we need to do that in order to keep the City clean and the drains running.”